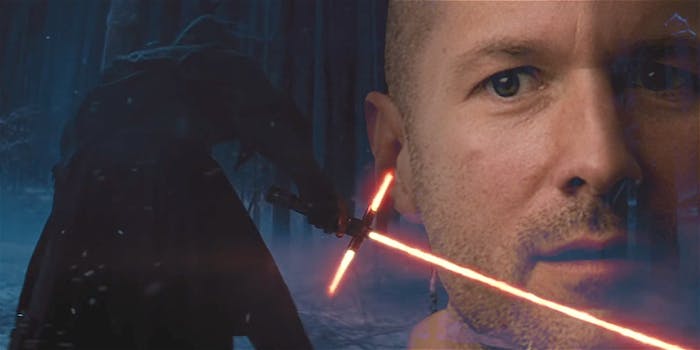 A guy who thrives on modern design suggested something more primitive for Star Wars.

Apple fans are poring over a New Yorker profile of Apple Senior Vice President of Design Jonathan “Jony” Ive for clues about the future of their favorite brand. Star Wars fans, meanwhile, would do well to read one passage from the profile that sheds light on the most controversial detail from The Force Awakens trailer.

According to the profile, Ive—best known for his work on iconic Apple products like the MacBook, iPod, iPhone, and iPad—influenced the rough, unstable design of the lightsaber carried by the villain Kylo Ren in the teaser trailer for the next Star Wars movie. Here’s how New Yorker writer Ian Parker explains it (emphasis added):

Ive once sat next to J. J. Abrams at a boozy dinner party in New York, and made what Abrams recalled as “very specific” suggestions about the design of lightsabres. Abrams told me that “Star Wars: The Force Awakens” would reflect those thoughts, but he wouldn’t say how. After the release of the film’s first trailer—which featured a fiery new lightsabre, with a cross guard, and a resemblance to a burning crucifix—I asked Ive about his contribution. “It was just a conversation,” he said, then explained that, although he’d said nothing about cross guards, he had made a case for unevenness: “I thought it would be interesting if it were less precise, and just a little bit more spitty.” A redesigned weapon could be “more analog and more primitive, and I think, in that way, somehow more ominous.”

Whether you love the new lightsaber design or hate it, you can’t deny that one of its two distinguishing features is the angry appearance of its blades. (The other key feature, of course, is the weapon’s hotly debated crossguard form.) Rumors abound that Kylo Ren, who will likely be played by Adam Driver, is something of a self-taught Force-wielding warrior, relying on ancient teachings rather than a formal apprenticeship in the dark side to construct the weapon he wields in the teaser.

The creative team behind The Force Awakens has said very little about the crossguard lightsaber, also called the “broadsaber” because of its resemblance to a broadsword. In a recent interview with Collider, director J.J. Abrams said only that the weapon was the product of “a number of conversations.”

“I cannot tell you how many contradictory emails I have received,” Abrams said, “from people who have both defended it with unbelievably detailed graphics…I’ve gotten things that are nuts, and I’ve gotten people who’ve shown how it’ll kill you and how it doesn’t make any sense.”