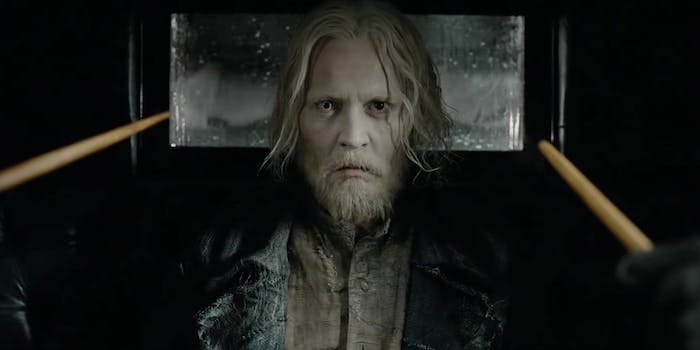 Fantastic Beasts: The Crimes of Grindelwald, the latest film in the monolithic Harry Potter franchise, excited fans with a brand new full-length trailer on Saturday, but it was the appearance of actor Johnny Depp that had Twitter talking.

Depp (who plays the villain Gellert Grindelwald) and, by extension Warner Bros., received a large amount of criticism for the actor’s role in the film, due to recent allegations by Depp’s ex-wife Amber Heard that the actor physically abused her.

At San Diego Comic-Con, Depp walked out on stage during the Fantastic Beasts panel dressed as Grindelwald. Depp can be seen speaking in-character to the audience, thanking them for their applause. Other tweets from audience members indicate that Depp gave a brief monologue on muggles (the Harry Potter-verse word for non-magical folk) and left shortly thereafter.

A member of the audience could be heard shouting “I love you, Johnny.”

Depp’s appearance at Comic-Con flies in the face of the controversy surrounding him, as every major player in the film’s production has had to either defend or talk away the allegations against Depp. These allegations are made all the more prominent by the surge of the #MeToo movement, which many women in Hollywood have used to illustrate their own experiences with sexual harassment.

Fantastic Beasts director David Yates defended Depp last November, citing his “decency and kindness.” Even author J.K. Rowling (who also wrote the screenplays for both Fantastic Beasts) dipped her toes into the matter, releasing a statement on the studio’s decision to keep Depp in the film.

“The agreements that have been put in place to protect the privacy of two people, both of whom have expressed a desire to get on with their lives, must be respected,” Rowling wrote. “I accept that there will be those who are not satisfied with our choice of actor in the title role. However, conscience isn’t governable by committee. Within the fictional world and outside it, we all have to do what we believe to be the right thing.”

The decision to include Depp as part of the event could be seen as either a defense of the actor’s integrity or an unwise misreading of the room.

The panel debuted the official Comic-Con trailer for Fantastic Beasts 2, which features Jude Law in the role of a young Albus Dumbledore. The trailer shows off some of protagonist Newt Scamander’s childhood at Hogwarts, before ending with a surprise appearance from the owner of the sorcerer’s stone.

The film will be released Nov. 16.