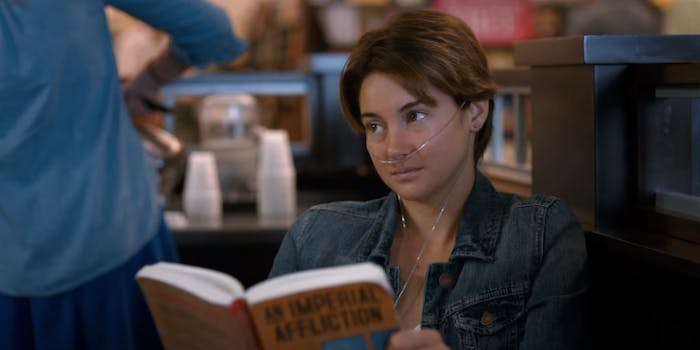 The Fault in Our Stars is so close we can taste it.

The Fault in Our Stars is almost here. You’ve read the book, you’ve posted your reviews, you’ve watched the trailer (again and again), you’ve fallen in love with John Green, and you’ve kept up with the rabid Tumblr fandom. Now, you can be a part of one more part of the story before the highly anticipated film hits theaters June 6.

On Thursday, May 22, Austin’s Alamo Drafthouse and Forever Fest are presenting a special preview screening of the heartbreaking YA novel-turned-Shailene Woodley outlet. The screenings will be held at a dozen Drafthouse theatres across the nation—six in Texas, two in Virginia, and one each in Missouri, Colorado, New York, and Michigan. After the screening, author John Green and director Josh Boone will be joined by Forever Fest cofounders Brandy Fons and Sarah Pitre for a Q&A about the film.

They’ll be appearing live in Austin, but the Q&A will be simulcast to the other 11 Drafthouse locations beginning at 9:15pm ET. If you don’t live in one of those cities, however—or if you didn’t RSVP in time to reserve a spot in Austin—don’t fret. The whole thing will also be streaming on the Popsugar Girls’ Guide YouTube channel; tune in there to catch all 30 minutes of Boone and Green talking about Hazel and Gus with two of the most dedicated YA aficionados west of the Mississippi.

If they share the secret to watching the film without bawling your eyes out, you’ll want to be sure to catch it.