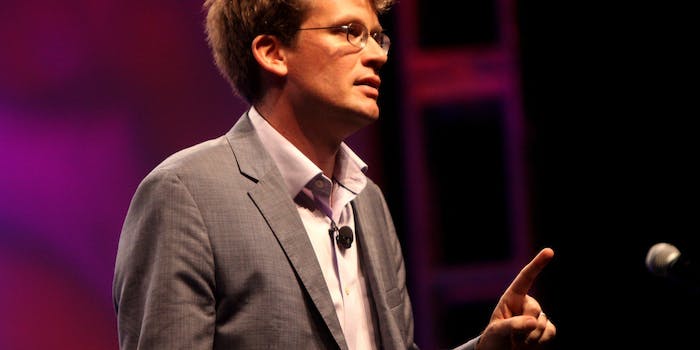 Warning: This article contains spoilers for John Green’s The Fault in Our Stars.

It’s Banned Books Week, and America’s schools have been busy proving they’re up to the challenge: Just a few weeks after John Green‘s book An Abundance of Katherines was banned along with a bevy of other books in a Dallas high school, YouTube‘s favorite son has seen his acclaimed tearjerker The Fault in Our Stars yanked from a California middle school.

As you might expect, the critically acclaimed author hasn’t wasted the opportunity to point out how ridiculous he finds this turn of events.

“Hey John,” one of his fans wrote on Tumblr in response to the banning:

What is your reaction to the news that the Riverside district has chosen to ban TFIOS from middle school libraries on the grounds that it deals with mortality and sex? I remember your reactions to similar situations concerning your books have been pretty animated and wondered what you thought?

Green has been outspoken in the past in defending his own book and the works of other acclaimed authors whose books have been banned or threatened. Earlier this year, he successfully rallied his fans to speak out against a parental attempt to “purge” a Young Adult curriculum in a Colorado high school. He noted wryly at the time that it was important to maintain one’s cool, “even if this kind of thing turns you into a giant squid of anger.”

He was a bit more gregarious about the most recent banning, as evidenced by his hilariously tongue-in-cheek response to his fan:

I guess I am both happy and sad.

I am happy because apparently young people in Riverside, California will never witness or experience mortality since they won’t be reading my book, which is great for them.

But I am also sad because I was really hoping I would be able to introduce the idea that human beings die to the children of Riverside, California and thereby crush their dreams of immortality.

The Riverside school district’s ban followed another California school’s banning of the Pulitzer Prize-winning Rabbit Is Rich by John Updike earlier this week; but while parents in that district protested Updike’s book as pornographic, it’s hard to understand objections to Green’s largely innocuous book about a cancer-battling teenager who falls in love.

After review, parents in the Riverside Unified School District allowed the book to remain in their high school library, but pulled it from the shelves of Frank Augustus Miller Middle School. They also forbade other schools in the district to buy or accept donated copies of the book, which Time declared to be the best book written in 2012.

Perhaps having the author’s personal response to the school district’s decision might cause some parents to rethink the decision to partially ban a book whose moral takeaway is about coming to terms with death.

Then again, Green is an author who seems to be perennially misunderstood, whether he’s being erroneously credited with the resurgence of respectable Young Adult fiction, or being labeled inexplicably as a writer of pornography for his debut novel, Looking for Alaska—incidentally one of the most banned books of 2013. Here he is in 2008, defending Alaska from yet another banning attempt.

But if Green seemed particularly eyeroll-y about his book being banned this week in California, it was probably because he had much more cheerful news on his mind: He and his formidable band of teen and young adult Nerdfighters just raised over $160,000 as part of his Water.org campaign to bring clean water to 8,000 residents of Ethiopia. The Bill Gates Foundation has partnered with Green to match his campaign with at least $100,000.

Sounds like Green’s teen fans may have survived the negative effects of reading his books.