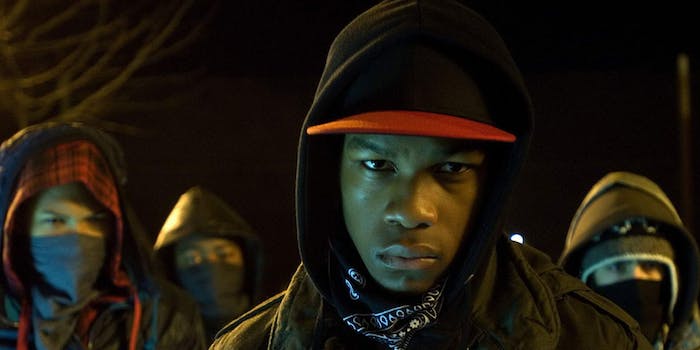 His cryptic tweets have sent fans into overdrive.

Out of all the new Star Wars actors, John Boyega has the most interesting Twitter feed — or at least, the most appropriate for a geeky Star Wars audience. These days, it’s more or less mandatory for sci-fi actors to seem as nerdy as possible, but Boyega seems like the real deal.

Earlier this week he was tweeting about Marvel’s decision to have Sam Wilson take over as Captain America. Boyega voiced a concern that was already being discussed by many comicbook fans: Was this changeover just a publicity stunt (“OMG, Captain America is a black guy now!”), or are Marvel putting serious thought into diversifying their most popular superhero comics?

So captain America will be a black man! Erm okay… Can we have character information, origin story and Steve Rogers comparison.

There is no need to emphasise the ‘black’ man. Falcon has been by Steve’s side for some time. Frickin ell.

Although I have issues with the lack of roles for raccoons and talking trees. Glad guardians will change this.

It seemed pretty clear that Boyega is a fan of Marvel comics, which inevitably led to some of his Twitter followers wondering if he’d want to get a role in a Marvel movie sometime in the future.

Well, duh. Of course he would.

He followed this up with a reference to Wakanda, the fictional African nation that is best known for being the home of Marvel’s Black Panther.

We already know that a Black Panther movie is in the works, with Stan Lee mentioning it several times in the past few months. These tweets are already leading to rumors that Boyega might be in the running for the lead, which is obviously nonsense. Anyone can tweet that they’re interested in a movie role, and besides, Boyega is way too busy with Star Wars.

Still, Boyega’s Twitter presence is already hinting that he’s a fanboy hero in the making. San Diego Comic Con 2015, anyone?