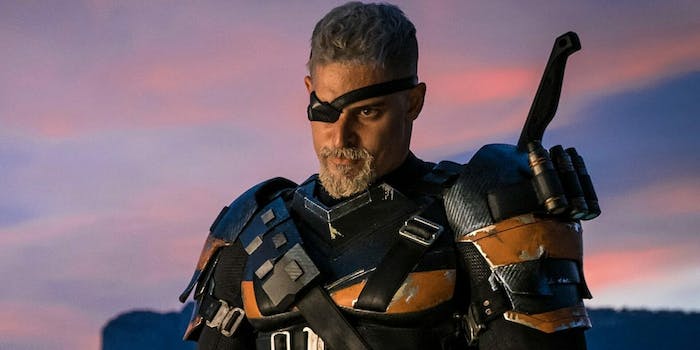 Joe Manganiello got cast as Deathstroke thanks to Instagram fanart

A producer Googled it—and the move creates a troubling precedent.

Joe Manganiello landed his role in Justice League due to fanart, according to a recent comment he made at Oz Comic-Con.

He played the mercenary Deathstroke in Justice League’s post-credits sting, teasing a larger role in Justice League 2 or the solo Batman movie. Gareth Evans (The Raid) was even tapped to direct a Deathstroke spinoff. But so far, Deathstroke’s only real screentime was that brief scene with Lex Luthor, where Manganiello appeared with bleached white hair and an eye patch.

The Magic Mike actor explained that producer Jon Berg cast him after googling Deathstroke to get a handle on the character. (An understandable decision, given the similarities with DC’s other red-and-black-clad mercenary, Deadshot.) A piece of Instagram art by Bosslogic came up, showing Manganiello in the role. The rest is history.

During the Oz Comic-Con, it was revealed how @JoeManganiello got the role of Deathstroke in the DCEU.

"They wanted to introduce Slade at the end of Justice League…So Jon Berg searched Deathstroke on Google and saw @Bosslogic's fan art Joe as Slade and got the offer." pic.twitter.com/B7YkKcUNsT

As Manganiello pointed out on Twitter, it wasn’t simply a matter of seeing some fanart and making a call. Presumably some kind of audition or script read-through was involved. But the fact remains that Warner Bros. cast a significant role via Google image search.

This sounds similar to the upcoming Rihanna/Lupita Nyong’o heist movie that resulted from a viral fan-casting post. Someone shared something cool online, and then a movie studio took notice. At the same time, hopefully this won’t become a widespread trend for existing characters like Deathstroke. Fans don’t necessarily know better than professional casting agents. Plus, there’s the matter of what type of fanart arrives in front of studio execs’ eyeballs.

Bosslogic is probably the most visible mainstream fanartist, often shared on geek sites thanks to his realistic illustrations of comic book characters. His work is tailored to go viral, featuring popular casting choices like John Boyega as Blade or Leonardo DiCaprio as the Joker. That’s not a criticism—it just sets Bosslogic apart from most fanartists, who hail from the transformative (ie. fanfic) side of fandom. It’s hard to imagine Warner Bros. casting a superhero based on the kind of art you see by women on Tumblr. And if you rely on the kind of dream casts that go viral on Fanboy Twitter, you’re never going to see innovative choices like Zazie Beetz as Domino in Deadpool 2.

As for Deathstroke’s future in the DCEU franchise, things don’t look great. Manganiello was excited to land the role, but his post-Justice League appearances are far from confirmed. Deathstroke may no longer be Ben Affleck’s antagonist in The Batman, if that movie happens at all. His solo movie now seems like an unlikely prospect, and Warner Bros. remains close-mouthed about Justice League 2. Deathstroke, we hardly knew ye.