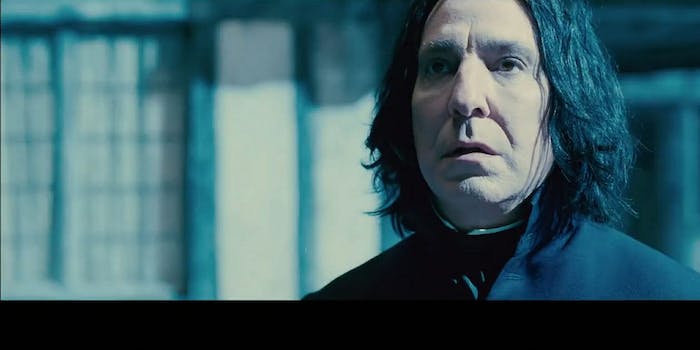 This fight is more predictable than Snape's unrequited love for Lily.

Take the most controversial character in the entire Harry Potter universe. Add one of the series’ most widely ridiculed moments. Toss in Twitter commentary from the beloved but outspoken creator and a fandom too invested in this debate to ever let it die.

Stir it up, and you’ve got a potion for fandom drama that could only have come from Severus Snape.

On Friday evening, J.K. Rowling took the time to address an issue that remains one of the most hotly contested moments in the series: Harry’s decision to name his son Albus Severus.

Snape died for Harry out of love for Lily. Harry paid him tribute in forgiveness and gratitude. https://t.co/MPXBgUApa3

There's a whole essay in why Harry gave his son Snape's name, but the decision goes to the heart of who Harry was, post-war.

In honouring Snape, Harry hoped in his heart that he too would be forgiven. The deaths at the Battle of Hogwarts would haunt Harry forever.

I've got to say this: you lot have been arguing about Snape for years. My timeline just exploded with love & fury yet again. Never change x

Rowling undoubtedly knew what a hornet’s nest she was poking by bringing up the issue of Snape’s bravery—if not how invested fans would be in this particular moment. Although the series ended in 2007, a large faction of Harry Potter fans have remained deeply dissatisfied with Rowling’s infamous “19 years later” epilogue, in which we meet Harry’s kids, including his son Albus Severus.

In the epilogue, Harry informs little Al that he was named after Snape, who Harry declares was “probably the bravest man I ever knew.” This proclamation is among the most controversial lines in the entire series.

This is the same Severus Snape who joined Voldemort, willingly committed unspeakable acts of torture and murder, bullied students, and oversaw systemic violence and abuse during his reign as the headmaster of Hogwarts. Even though he spent years spying for the Order of the Phoenix, it’s hard for many fans to view him the way Harry ultimately does; after all, plenty of Harry’s friends fought against Voldemort from the beginning, ultimately died for the cause of equality and saving the world, and weren’t racist child abusers.

Harry’s pronouncement that Snape was braver than Cedric, Remus, Tonks, Mad-Eye, Sirius, Regalus, Dobby, and (sob) Fred—to name just a few—still rankles today. (There’s also the fact that no kid would have an easy life if their name were Albus Severus. Come on, Jo.) So great is the ire fans have for this particular moment in the epilogue that it’s spawned a hugely popular Tumblr meme:

(Sorry, this embed was not found.)
[Placeholder for http://libbylumos.tumblr.com/post/99869258648/somepotternerd-hagrid-hagrid-potter-you-were embed]

Though much of the meme’s popularity comes from its humor and randomness, there’s a subtext of deep resentment over Harry’s choice to name his son after Snape:

But Snape is also one of the most fiercely defended of the characters in the Harry Potter pantheon. Sure, he may be deeply flawed, but he’s also a classic tortured gothic hero, misunderstood and tormented in his own childhood, who spent his life trying to be worthy of a deep unrequited love. That’s catnip to lots of fans, and Snape has as many passionate supporters as he has detractors.

Knowing she had plenty of readers on both sides of the debate, Rowling spelled out her thoughts on Snape’s tricky, duplicitous, and contentious nature, noting he “deserves both admiration and disapprobation”:

This morning I've been thinking a lot about the appeal of simple dichotomies in our messy world, then you raise Snape! Highly appropriate.

She also pointed out when fans on either side of the divide were being either too generous or too quick to malign, elucidating Snape’s character throughout the day:

Snape was a bully who loved the goodness he sensed in Lily without being able to emulate her. That was his tragedy. https://t.co/nzWhNrBxdH

Snape didn't die for 'ideals'. He died in an attempt to expiate his own guilt. He could have broken cover at any time to save himself 1/2

but he chose not to tell Voldemort that the latter was making a fatal error in targeting Harry. Snape's silence ensured Harry's victory. 2/2

He stood to gain nothing personally but the triumph of the cause Lily had believed in. He was trying to do right. https://t.co/h00btgHwSI

But while fans were grateful for the insight, many were quick to challenge her about this “Albus Severus” business. Here’s what Rowling had to say about all the people Harry didn’t name his kids after:

Harry chose to perpetuate the names of the two who had nobody in their families to do so. https://t.co/uwQVA9Tz9O

This makes a lot of sense, but what about…

@jk_rowling Hagrid had no one to do that; I'd wager he was braver than Snape at every turn.

@jk_rowling WHAT ABOUT MOODY? I just think Harry and Ginny need more kids

And so the battle rages ever on.

Rowling, alas, declined to offer a similar character analysis for Dumbledore, but she did seem to be perfectly sanguine about the uproar she’d caused.

Among the people lucky enough to get replies from Rowling were some who complained that they’d been beset with hate from other fans angry with their questions. Rowling called for civility in the discussion, but given that this is Snape we’re talking about, that was wishful thinking.

In the end, Rowling left the Internet to its devices—and left Snape fans to celebrate.