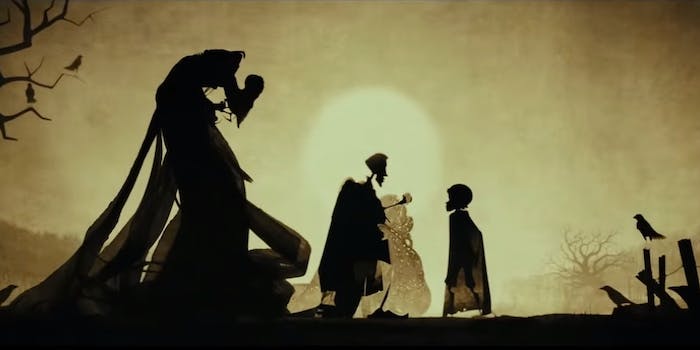 She loves it and it fits the 'Harry Potter' canon.

Fans have been asking J.K. Rowling questions about Harry Potter for years, and while she’s answered many of our inquiries with a definitive response, she’s now even weighing in on popular theories.

One fan asked Rowling about her favorite Harry Potter fan theory on Friday, and with plenty of them to choose from (among them involving a time-traveling Ron Weasley) she gave her view on it.

Dumbledore as death. It's a beautiful theory and it fits. https://t.co/QqTQm2QnI0

As far as fan theories go, it’s a pretty clever one. It doesn’t involve needing too many things to come together at once, an alternate universe, or speculating on things that have yet to come. Instead, it takes what we know about the canon and turns it on its head a bit.

For some time now, people have been speculating what “The Tale of the Three Brothers,” a wizarding children’s tale that appears in Deathly Hallows and The Tales of Beedle the Bard, really means. Hermione reads it in Deathly Hallows while Xenophilius Lovegood offers some explanation about the hallows hidden between the lines.

But it’s more than just about the hallows: each brother and his respective Deathly Hallow correspond to a character in the series—as well as the mastermind behind it all. Per the theory, Voldemort is the eldest brother, Severus Snape is the middle brother, Harry is the youngest brother, and Albus Dumbledore is Death.

And it’s not just because of which hallows some of them may have possessed during course of the series (with Snape thrown in for good measure). The allegory goes far beyond that, although we must take some liberties with the death order in the story.

In Voldemort’s case, he’s just as power-hungry as the eldest brother. He wanted the Elder wand, which he felt made him invincible; he was likely just as drunk on it as the eldest brother. It was what he underestimated—stuff like Harry’s capabilities, how far Snape would go for Lily Potter, and love—that did him in.

While Snape never possessed a Deathly Hallow, he fits the M.O. of the middle brother quite nicely. He lost Lily because of his own actions well before Voldemort killed her, but he clung onto her memories so much it fueled him to switch sides and help Harry—a boy he despised because he looked like his father. He held onto her, but she wasn’t really there, just like the middle brother’s lost love. It’s her memory that he ultimately dies for.

Harry represents the youngest brother not just because he possessed the Invisibility Cloak from the story—a family heirloom passed down from Ignotus Peverell, who’s believed to be the youngest brother from “The Tale of the Three Brothers. When it came down to it, he sacrificed himself in order to kill the Horcrux inside him. And who should he meet when he does?

A smiling Dumbledore, ready to welcome him with open arms. One who has possessed all of the Deathly Hallows at some point in his long life, who’s manipulated the major players to get them to where they needed to be. And it’s said that the only man Voldemort feared was Dumbledore, which if he’s Death, is even more fitting.

While the theory has been around for some time, it’s gained more traction through a viral Tumblr post in recent weeks.

Even if that was never Rowling’s original intentions with the Beedle the Bard tale, it’s now got the highest of support.