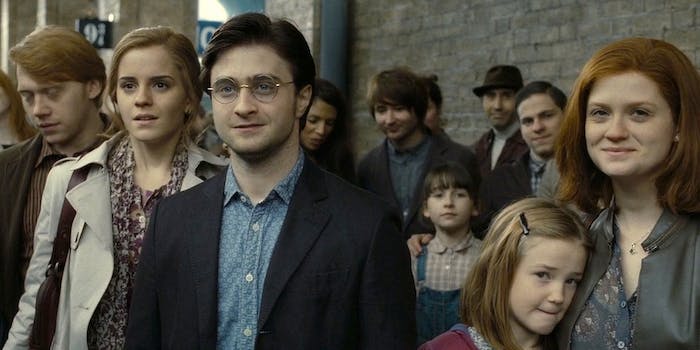 New J.K. Rowling dispatch gives us a glimpse at Harry Potter in his 30s

A new column from Gossip Correspondent Rita Skeeter gives us a glimpse into the gown up lives of Harry and his friends.

We’re getting another fleeting glimpse into the future of Harry Potter thanks to a new short story from J.K. Rowling.

For the past few months, Rowling has been writing about the 2014 Quidditch World Cup on Pottermore as Ginny Potter, who’s now a Quidditch correspondent for The Daily Prophet after a career with the Holyhead Harpies. Brazil and Bulgaria will now face each other in the World Cup finals on July 11, and with that, thousands of wizards and witches will be descending onto the Patagonian Desert.

In a new column from Gossip Correspondent Rita Skeeter, the infamous reporter who wrote many damaging articles about Harry and his friends in the Harry Potter books, we learn what’s happened to Harry, Ron, Hermione, and some other members of Dumbledore’s Army in an article called “Dumbledore’s Army reunites at Quidditch World Cup Final.” (You’ll need a Pottermore account to read it.)

Harry, now a little more than three weeks shy of 34, has arrived at the campsite with his and Ginny’s sons, James and Albus. There’s much buzz about when the Potter family will visit a 38-year-old Viktor Krum, who’s managed to get the Bulgarian team to the finals in a redemptive arc after Bulgaria lost in the 1994 finals to Ireland (as seen in Goblet of Fire). The 2014 Quidditch World Cup takes place about three years before the Epilogue at the end of Deathly Hallows.

Dumbledore’s Army has been given VIP status at the World Cup, so along with the Potters we catch mentions of Ron and Hermione and their family, and smaller nods to Neville Longbottom, Luna Lovegood, a 16-year-old Teddy Lupin, and a few of Ron’s brothers. Each tidbit is like a golden nugget for fans who’ve had seven years since the final book came out.

Skeeter takes subtle (and some not so subtle) digs at the trio’s appearances with a hint of glee—”[Harry] continues to wear the distinctive round glasses that some might say are better suited to a style-deficient twelve-year-old”—while throwing shade at Ginny’s writing ability, which might ring familiar to anyone who’s heard similar snark about former professional athletes turned reporters. Some of our favorite characters, we’re happy to learn, haven’t changed a bit. It’s just delightful.

While a spokesperson for Rowling told The Bookseller that she had “no plans” to write any more stories about an older Harry, she falls into the swing of things quite easily. We can certainly picture Skeeter focusing more on this set of characters than anything else happening at the Quidditch World Cup—and of course she has a new scandalizing book coming out soon, fittingly enough on Harry’s birthday.

It’s not the first time Rowling has delved back into the HP universe. She once wrote a short story about one of James and Sirius’s escapades, and she’s currently writing the screenplays for a trilogy based on Fantastic Beasts and Where to Find Them, the first which is set to come out on Nov. 18, 2016.

H/T The Bookseller | Screengrab via norewardisworththis/Tumblr