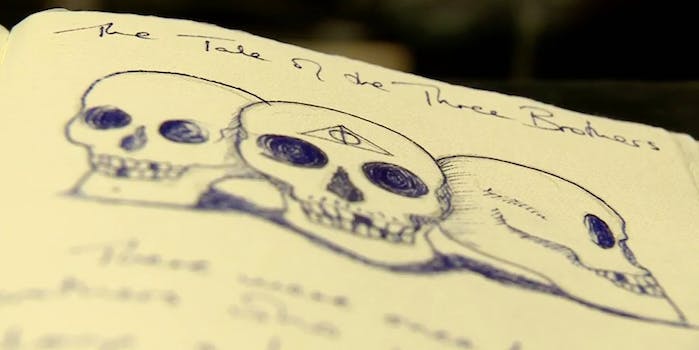 That's a lot of galleons.

A very special volume of a very special book in the Harry Potter universe went up for auction Tuesday, raking in an impressive £370,000 ($470,000).

What kind of book is worth that much money? A copy of The Tales of Beedle the Bard, hand-written by J.K. Rowling herself.

Harry Potter, Ron Weasley, and especially Hermione Granger found many books helpful as they prepared for their exams at Hogwarts and battled evil forces in the wizarding world. But perhaps the most important of them all was The Tales of Beedle the Bard.

Though it’s simply a children’s book, it contains a story titled “Tale of The Three Brothers,” which is the origin story of the Deathly Hallows: the elder wand, the resurrection stone, and the invisibility cloak. Together the items are said to make the wizard who owns them a “master of death.” They play heavily into the plots of the Harry Potter books and films, (and we’ll likely also see them pop up in the new Fantastic Beasts franchise).

It’s fitting that Rowling choose to recreate the book by hand in seven handsome leather-bound and bejeweled volumes as gifts for several of the people most closely involved in making Harry Potter happen. She gave six of the books as gifts, while a seventh she put up for auction to raise money for charity in 2007; and it did, to the tune of  £1.95 million ($2.4 million).

This week, one of the gifted volumes belonging to Barry Cunningham—the publisher who originally signed Rowling, went up for sale—fetching a bargain price compared to the earlier auction.

While it’s still way too rich for our blood, the book, with a thoughtful note to Cunningham on the first page, is a pretty impressive sight to behold. You can see more photos of the book here.