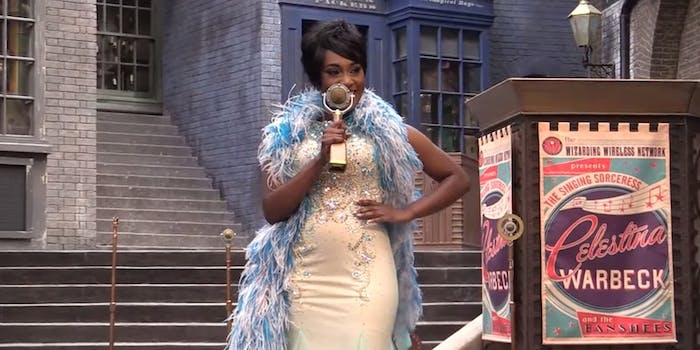 She was mentioned in three Harry Potter books, but we knew nothing about her—until now.

J.K. Rowling’s fascination with the wizarding world is still alive and well. She recently released a new biography on a minor character from the books, someone you’ve very likely forgotten about.

She was mentioned in three Harry Potter books, but we knew nothing about her—until now.

Celestina Warbeck, also known as the “Singing Sorceress,” may have never appeared in the books in the flesh, but she was name-dropped quite a bit. Characters often heard her name or voice on the radio, and she was one of Molly Weasley’s favorite singers. And as Rowling revealed on Pottermore, Aug. 18 is her birthday.

In order to access the new information, you’ll need to go to the Floo Powder scene from Chamber of Secrets and click on the radio; if you don’t have a Pottermore account, Today has republished the excerpt.

The daughter of a “minor functionary in the Muggle Liaison Office” and a failed actress, Warbeck showed vocal talent at a young age, and while she attended Hogwarts (where she was sorted into Gryffindor), her mother constantly wrote letters urging the school to create clubs to showcase her talents.

Celestina Warbeck and the Banshees are huge in the Wizarding World to the point where her tickets sold at “vastly inflated prices” on the black market (even magical musicians’ tickets are getting scalped). And like many celebrities, she lived a lavish life often filled with scandal, but the hits kept coming, even late into the 20th century.

Rowling also revealed her origins for Warbeck, whom she called “one of my favourite ‘off-stage’ characters in the whole series.

“Although we never lay eyes on Celestina during the whole seven volumes of the Potter books, I always imagined her to resemble Shirley Bassey in both looks and style,” she wrote. “I stole her first name from a friend with whom I worked, years ago, at Amnesty International’s Headquarters in London; ‘Celestina’ was simply begging to be scooped up and attached to a glamorous witch.”

Pottermore has provided a performance of Warbeck’s hit song “You Stole My Cauldron but You Can’t Have My Heart,” but if you end up at the Wizarding World of Harry Potter, you can catch her performing in Diagon Alley with her Banshees daily.

H/T BuzzFeed | Photo via Inside the Magic/YouTube