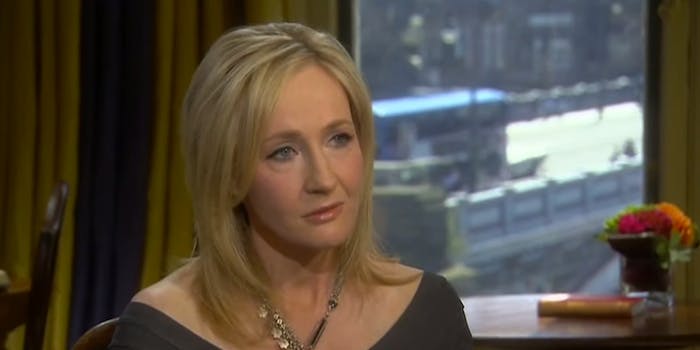 It's a whole bunch of hogwash.

J.K. Rowling had a thing or two to say when it came to U.S. Supreme Court Justice Antonin Scalia’s dissent following Thursday’s decision to uphold part of the Affordable Care act.

In the dissenting opinion, Scalia wrote “words no longer have meaning” as he coined the term “SCOTUScare” and called the majority opinion “pure applesauce” and “somersaults of statutory interpretations,” adding even more jargon to his ever-growing lexicon. But what will probably be the one that sticks out is the bit of mumble-jumble that already exists.

“The Court’s next bit of interpretive jiggery-pokery involves other parts of the Act that purportedly presuppose the availability of tax credits on both federal and state Exchanges,” Scalia wrote on the eighth page of his dissent.

However, for some people the term seemed kind of familiar, like it belonged in a Harry Potter book and not coming out of Scalia’s mouth. According to Time, “jiggery-pokery” goes all the way back to the late 19th century and basically means “dishonest manipulation or nonsense, akin to hocus pocus” and other absurd terms.

And Rowling is above it all when one fan says that seems more like her thing than Scalia’s, which also works as a summation of Scalia’s dissent for a lot of people.

@jk_rowling You have my deepest apologies. I dream of a world where folks can jiggery-poke as they please without fear.

As some Harry Potter fans will recall, Rowling actually included the phrase “jiggery-pokery” in Chamber of Secrets when Harry tried to scare his cousin Dudley with some fake displays of magic. With the book’s release in 1998, the math pans out.

I KNEW I'D SEEN JIGGERY-POKERY IN A HARRY POTTER BOOK #CoS pic.twitter.com/cMdYFEsEqG