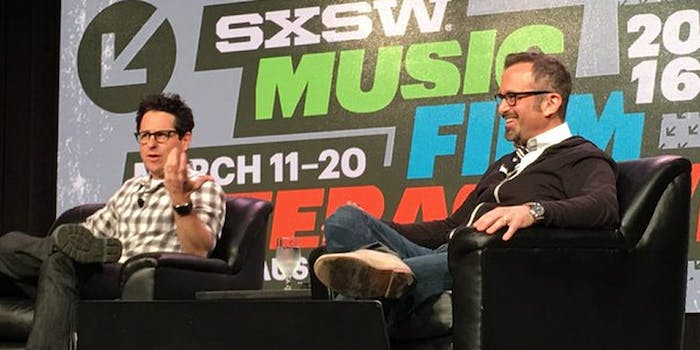 'We had to do something.'

Line to see JJ Abrams speak at #SXSW. This is he ground floor. Line winds across 3 and 4th floors. #LongLine pic.twitter.com/gU9VsMFdEO

#SXSW is crazy today. It's just JJ Abrams, y'all. It's not like he saved Star Trek and Star Wars…oh wait…

Recode’s Peter Kafka joined the two creators for a conversation about advancements in digital media and the human element involved in crafting a story that utilizes digital components. Abrams also debuted a brief clip from his upcoming collaboration with HBO, Westworld. Abrams is producing the star-studded, Inception-esque Western sci-fi about a mysterious theme park, which comes from a story originally penned by Jurassic Park author Michael Crichton. The brief new footage gave audiences an enticing look at some of the show’s incredible robot designs.

Not to be outdone, Jarecki also gave audiences a glimpse of cut footage from The Jinx showing alleged serial murderer Robert Durst in an unguarded moment. “He’s a huge stoner,” Jarecki quipped. “This is a guy who was always, always stoned.”

Abrams and Jarecki also were on hand to promote a new mobile video app called Know Me, billed as a “new video platform for authentic self-expression.” Think of it as a cross between Vine and Snapchat but with longer video footage capability.

Though Abrams and Jarecki ostensibly do very different kinds of work in Hollywood, they share a common goal: Both The Jinx and The Force Awakens needed to seriously humanize their subjects, whether they were man or machine. Abrams and Jarecki have been fast friends for 25 years, ever since they met at the Grand Canyon. The two of them both have a background performing magic tricks for kids’ birthday parties—a unifying history that gave them a unique perspective on digital technology in filmmaking.

“It’s an incredible thing to think how technology has allowed major motion pictures to be made in an old and new school hybrid,” Abrams said, speaking of the combination of puppetry and digital effects that went into creating the lovable BB-8 droid. CGI was often used, not to augment BB-8’s appearance, but to remove puppeters from the scenes he was in.

“The challenge with technology in film is trying to hide it. It was important to have [the character] feel as analog and authentic as possible,” he said.

Abrams said that because audiences had grown so used to special effects, they’d also grown “immune to spectacle.” He was firmly against using special effects just because you can. “I think the challenge is to be aware of [digital tools] and to use [them] as sparingly as possible.” For Abrams, the goal of storytelling is to make the audience’s experience “as effortless as possible,” while asking yourself what the moment needs rather than what you can do simply for technology’s sake.

“The best movies capture you in a way that’s far more profound than a three-dimensional effect,” he said.

Still, Abrams is far from being anti-digital. He noted that at least 10 minutes of The Force Awakens was filmed totally at his Bad Robot studios, a feat which could never have been done without new digital tools. And though he acknowledged that many filmmakers were wary of technology that brought the ability to watch films on smart phones, he was all for it.

Meanwhile Jarecki, whom Abrams called “a divining rod for cool shit,” introduced the new Know Me app by comparing its potential to Snapchat. Know Me functions as a kind of personal movie-maker on your phone, but you can also use it to record voice-over narration over pre-existing still photos and phone recordings. The idea behind the app is to put the power of creation in the hands of individuals without access to expensive tech tools. Initial audience reaction to the app seemed positive.

Abrams’ SXSW appearance today comes on the heels of news that his planned film adaptations of Portal and Half-Life are each still in development. The busy creator joked that he could no longer use his go-to excuse for avoiding projects: “Sorry, I can’t help you, I’m directing Star Wars.”

“Directing Star Wars was easy,” he joked. “And now that it’s over… fuck!”

But the guy who was given the reigns of two of the world’s biggest sci-fi franchises still has big plans for the future—beginning with making sure the future doesn’t belong only to white guys like himself.

“We had to do something,” he said, remarking on the controversy surrounding #OscarsSoWhite and Hollywood’s record when it comes to casting women and minorities in meaningful roles. Abrams told the appreciative crowd that following the Oscars backlash, he instituted a new diversity policy at Bad Robot, which involved asking his casting agents to send him casting lists that reflected the demographics of the country in which the story was set.

“We want to see stories that are unique and told by people whose points of view are underrepresented,” Abrams said.