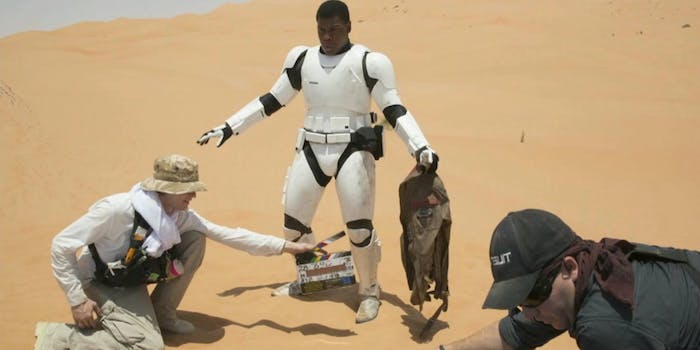 A star-studded inside scoop on the new 'Star Wars' movie from 'Star Wars': Celebration.

Those three little words set the halls of the Anaheim Convention Center and subsequently the Internet ablaze Thursday as the second Star Wars: The Force Awakens teaser trailer was revealed at a convention devoted to Star Wars by Kathleen Kennedy and J.J. Abrams.

While possibly everyone and their long, lost cousin has seen the new teaser trailer for Star Wars: The Force Awakens, a lot of things happened in the panel before the final reveal brought the house down.

Kathleen Kennedy, Lucasfilm president and producer of The Force Awakens, took the stage with J.J. Abrams to promote the latest iteration of the franchise. Kennedy looked the part wearing a white blazer with a Star Wars T-shirt that she purchased on the show floor before the event started. When discussing how she came into her role as president of Lucasfilm, Kennedy remarked that over dinner George Lucas told her, “I’m retiring and moving on and I want someone to come in and continue this legacy.” Kennedy revealed that at first she thought he was asking for recommendations on who could takeover the company, but realized that Lucas meant for her to succeed him.

Abrams waxed on throughout the panel about how Star Wars was, “incredibly powerful to me [as a child],” and reiterated his commitment to making the best possible Star Wars film that would appeal to everyone.

Discussion turned toward other topics fans were curious about such as the status of Harrison Ford after his emergency landing/plane crash with Kennedy stating, “He’s home and resting … Han Solo will be very actively involved with what we’re doing [as we get closer to the premiere].”

And fueling the dreams of every Star Wars fan out there, Kennedy shared a story about her first Star Wars Celebration in Germany where she was struck by the dedication to detail that fan astromech builders had when creating movie replica R2-D2’s and other astromech droids. She decided to hire two of the fans directly from the convention as members of the Creature Shop for Episode VII. Both droid builders came on stage and discussed their once-in-a-lifetime opportunity.

Abrams revealed the name of a new planet where scenes from both teaser trailers are set, so Star Wars grammarians take note: The appropriate spelling is Jakku. As fan anticipation ratcheted higher during the panel, a trio of actors Daisy Ridley, John Boyega, and Oscar Isaac took the stage and gave limited, but new details about their new characters: a scavenger, a stormtrooper, and “the best frickin’ pilot in the galaxy” according to Isaac.

Eventually the new stormtrooper design was revealed and almost the full original cast was brought back on stage (Mark Hamill, Carrie Fisher, Peter Mayhew, and Anthony Daniels) where they delivered heartfelt messages about Star Wars and their fans.

Sooner rather than later, the new teaser trailer premiered, but the entire panel and general feeling in the air at Star Wars Celebration was defined by something Kathleen Kennedy said during the panel.

“I don’t think there’s anything more important in the Star Wars universe than the fans.”