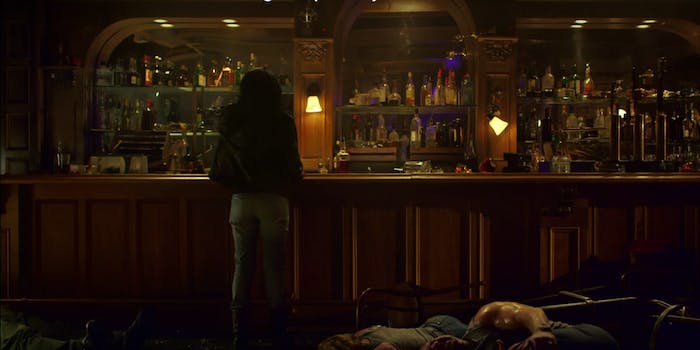 Jessica Jones is angry, messy, and violent. In other words, she's perfect.

Jessica Jones already looks refreshingly different from Marvel‘s other Netflix series, Daredevil. While Daredevil‘s main characters were often deceptively sweet-hearted, Jessica Jones is clearly a tougher nut to crack. Based on the newly released second teaser, it looks like the show is drawing a lot from the angry, alcohol-fueled tone of the character’s most famous comic book arc, Alias.

Netflix’s first teaser saw Jones pummeling her alarm clock into submission (at 3pm, no less), and this one shows her having a casual nightcap at a Hell’s Kitchen bar—right after beating up all the other patrons and destroying half the furniture. Just a typical evening out for your friendly neighborhood superhero/private detective.

Jessica Jones is messy, violent, and just a little bit punk rock. We couldn’t be happier that she’s joining the Marvel Cinematic Universe.