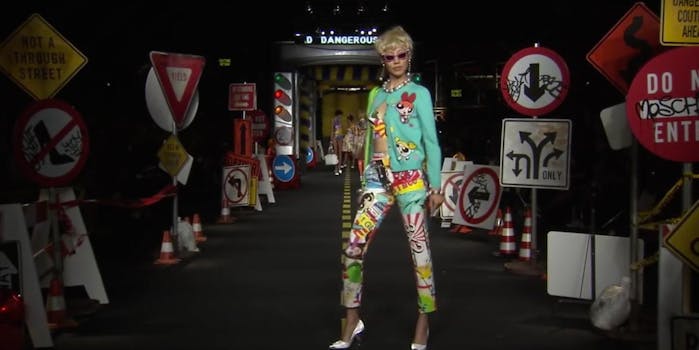 He's the designer who made SpongeBob fashion chic.

You might not think Saturday morning cartoons could have much influence on fashion, but then you’ve never seen product lines inspired by Spongebob and Shrek parade the runway. Designer Jeremy Scott has spent years making realizing the unlikely pairing of haut couture and children’s animated series.

Geek culture has long inspired high fashion, but lately animated series are more popular on runways than ever. That’s largely thanks to Scott, who became the creative director of Moschino in 2013. Scott’s work has featured a number of beloved animated characters, from Barbie to Mario. Scott’s animation-inspired collections are usually colorful and bright, with items ranging from everyday apparel to the truly outlandish. His designs, known for their “club kid aesthetic,” clearly aren’t for everyone, but they can be unexpectedly delightful for kids of all ages.

Here are our five favorite examples of Scott’s cartoon couture hitting the runway. At Milan Fashion Week this fall, Scott debuted designs full of sugar, spice, everything nice, and a little chemical X as part of a collaboration between Moschino and Cartoon Network. The Powerpuff Girls inspired Scott to create a line featuring the familiar faces of Blossom, Bubbles, and Buttercup. The line summons fan nostalgia for the classic show while also stirring their excitement for the upcoming series reboot in 2016. You’ll be able to gear up with these items starting in January, before the new show premieres. Look for The Powerpuff Girls x Jeremy Scott collection at Moschino stores and select online retailers.

What’s up, Scott? At the Moschino show for Milan Fashion Week this year, Looney Tunes made a huge splash on the runway with a collection as loud as the characters that inspired it. The apparel featured everything from streetwear and sweatpants to sweater dresses and miniskirts. Accessories ranged from high heels to belts and bags. There’s no doubt Bugs Bunny and his friends certainly made a statement! You can still get your hands on items from the line on Moschino’s website.

You might make you feel like you’ve traveled to a pineapple under the sea. SpongeBob SquarePants was the star of multiple designs in Scott’s first show for Moschino, which seemed both bold and completely fitting for the designer. The yellow and black ensembles stole an ambitious show that also featured designs inspired by McDonald’s and hip-hop culture. In the middle of it all, SpongeBob’s expressive face made an unforgettable impression.

America’s favorite cartoon family received the high-fashion treatment in a Jeremy Scott collection three years ago. At New York Fashion Week, Bart Simpson was the star of eight pieces on the runway. Bart made his appearance just in time for the airing of the show’s 500th episode and even managed to actually look quite chic on each outfit. Who knew Bartman could be stylish?