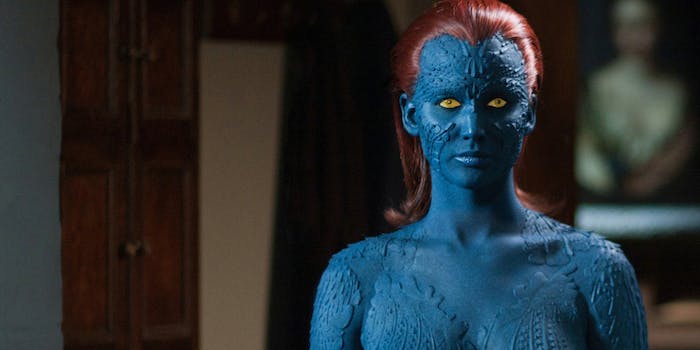 Will Jennifer Lawrence get a solo ‘X-Men’ movie as Mystique?

This needs to happen.

Ever since Marvel Studios made a billion dollars from The Avengers, everyone with a superhero movie property has been trying to launch their own megafranchise. Sony has several Spider-Man spinoffs in the works, Zack Snyder’s Batman/Superman movie is probably going to lead to a live-action version of the Justice League, and now Fox’s X-Men series is trying to get in on the action as well.

This may all sound a little vague, but on Tuesday it was revealed that Channing Tatum is already in talks to play Gambit, a casting choice that seems almost as ridiculous as when he was rumored to be starring in a reboot of The Crow. Hollywood is determined to cast Channing Tatum in some kind of superhero movie, but at the moment his name only seems to be linked to roles that feel kind of inappropriate, to say the least. For one thing, the suave, flirtatious Gambit is one of the very few comicbook heroes who isn’t built to Tatum-esque physical proportions. For another, anyone who plays him would have to speak with a thick Cajun accent for the entire movie.

As for the other potential X-Men spinoffs, a Deadpool movie has supposedly been in the works for years, but seems to be stuck in development hell. So unless that Gambit movie suddenly springs into action, Mystique still seems like the likeliest option for a new X-Men spinoff series. Fox hired Jennifer Lawrence before she was cast in the Hunger Games movies, meaning that her X-Men contract is surprisingly restrictive. She might have to prioritize a solo Mystique movie above any other potential projects whether she likes it or not, which isn’t something Fox can guarantee for Deadpool and Gambit.

If they wanted to, Fox could easily put a Mystique movie on the cards for sometime after X-Men: Days of Future Past. This would certainly be one in the eye for Marvel Studios, who have been teasing the idea of a female-led superhero movie for years, but still haven’t made good on their hints.