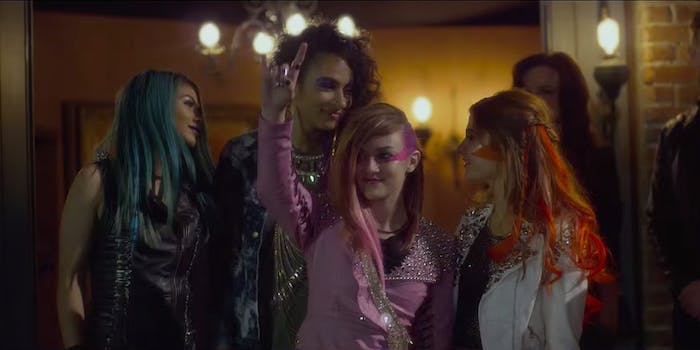 The first ‘Jem and the Holograms’ trailer is out, and fans of the original hate it

This is not the show you grew up with.

Have Jem, Kimber, Aja, and Shana found their own voice?

We’re finally getting our first look at the live-action Jem and the Holograms movie via BuzzFeed, and behind the outrageous costumes and bonds of sisterhood we have a tale as old as modern times: Girls go viral on YouTube, get signed by a major record company, become international superstars, have to juggle what’s authentic to them versus what the industry tries to mold them, and eventually come back together following a fight.

Fans, however, have some problems with the much more subdued take on the ’80s sci-fi cartoon.

They clicked on the Jem and the Holograms trailer and found themselves watching something else.

If you like the #JemAndTheHolograms Trailer you will LOVE my reboot of Voltron that is about 5 differently colored cats living together.

Why bother calling it #jemandtheholograms when they could have called it Hannah Montana Part 2: Electric Boogaloo?

Saw a screen-cap of the #JemAndTheHolograms trailer. It's like #Kesha threw up everywhere.

Whoever it was that said the #JemandtheHolograms movie looks like a Disney Channel exclusive continues to be spot on.

Yup. Still peeved the #JemAndTheHolograms movie trailer makes it look like Hannah Montana 2. Could have been a fun fantasy movie.

I can't remember the last time a trailer was so unanimously dismissed. #JemAndTheHolograms pic.twitter.com/TPgMTuQTfa

Why there is such a stark departure from the source material. This is designed to appeal to nostalgic fans but it won't. #JemAndTheHolograms

But what about rival band the Misfits, Universal?!

Disappointed in the #JemAndTheHolograms trailer. Love Molly Ringwald and Juliette Lewis, but where are The Misfits?

Nothing about #JemAndTheHolograms is like the show. They didn't even bother to put in the rival band, the Misfits. Thats some sad stuff.

Nine: This, this I cannot overstate: The Misfits. Dude, these awesome women had style, and no trouble committing major felonies every week!

The original Jem and the Holograms show is about music producer (and not small-town girl) Jerrica Benton, who becomes Jem with the help of a holographic computer, known as Synergy, left to her by her father. She tries to keep her own life and that of her alter ego’s separate. She, Kimber, Aja, and Shana make up the band and use Synergy to both bring special effects to their shows and save the day and protect Synergy from people who would steal it. The series as is continues in comic form with once-rival rockstars Kimber and Stormer in a relationship.

Instead, Jerrica is given the Jem persona by a music executive. And she’s juggling being a small-town girl in a big city and being an international pop star, a far cry from Jerrica’s job in the TV show—albeit one the teen audience might be able to relate to better.

For what it’s worth, here’s the official synopsis of the film courtesy of Universal Pictures.

As a small-town girl catapults from underground video sensation to global superstar, she and her three sisters begin a one-in-a-million journey of discovering that some talents are too special to keep hidden. In Universal Pictures’ Jem and the Holograms, four aspiring musicians will take the world by storm when they see that the key to creating your own destiny lies in finding your own voice.

And according to Hayley Kiyoko, who plays Aja in the film, there’s even more surprises in store in the movie. Whether fans already upset with what they saw will come and see it, however, is another story.

Did you love the #JemAndTheHolograms trailer?? You know we had to keep all of the surprises out of the trailer, you don't even know! -AJA