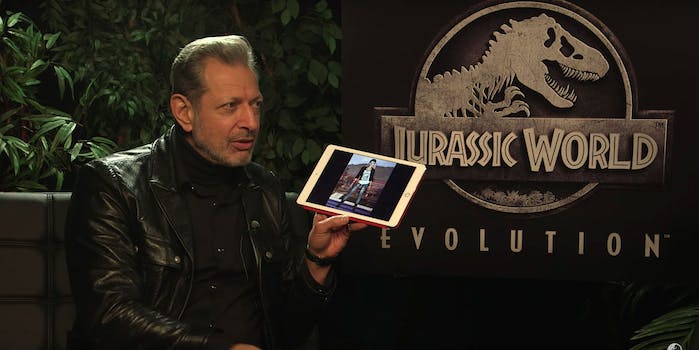 'I've never worn any kind of shell or saddle...'

Has Jeff Goldblum ever given a boring interview? Not if his recent sit-down with Eurogamer is any indication.

Goldblum is out promoting the upcoming Jurassic World Evolution game in which he reprises his role as Dr. Ian Malcolm. It’s a Roller Coaster Tycoon-type adventure where you build and operate your own dinosaur theme park. But the interview took a delightful left turn when Eurogamer asked Goldblum to rate some popular (and not so popular) video game characters.

The characteristically chatty Goldblum played along, giving some fashion critiques and making up his own backstories for the characters. He even revealed that like Chloe Price from Life is Strange, he too had blue fingernails (and toenails!) for his role as the Grand Master in Thor: Ragnarok.

When asked about Yoshi, the most famous dinosaur in gaming, Goldblum was confused about the shell/saddle on his back. “I’ve never worn any kind of shell or saddle,” Goldblum said coyly.

The one part of the exercise Goldblum didn’t like was how many of the characters carried weapons. We wouldn’t expect anything less from the guy who didn’t think humans were responsible enough to wield dino-cloning science, much less a laughably long samurai sword.

Jurassic World Evolution arrives in a digital format for PC, PS4, and Xbox One on June 12, followed by physical copies on July 3. You can check out a new trailer for the game below.