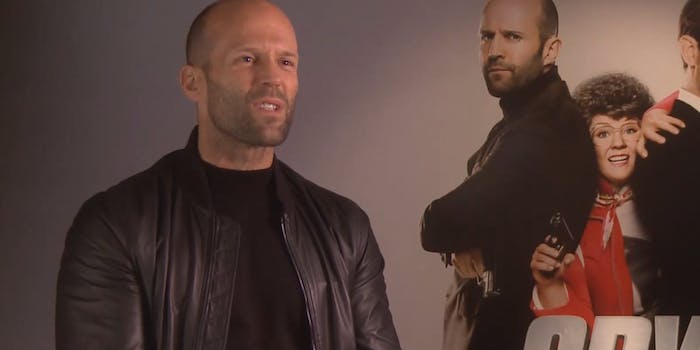 Jason Statham is a pretentious jerk about Marvel movies

Actually, we'd be kind of psyched to see Jason Statham's grandma star in a Marvel movie.

Marvel Studios is gobbling up Hollywood stars left and right, but one actor won’t be joining the Avengers franchise anytime soon.

During the press tour for SPY, Jason Statham decided to badmouth Marvel movies for being “inauthentic.”

“I could take my grandma and put her in a cape, and they’ll put her on a green screen, and they’ll have stunt doubles come in and do all the action,” said Statham. “Anybody can do it.”

Last week, Statham was rumored to be in the running for the role of Bullseye in the second season of Daredevil. Unsurprisingly, that rumor has since been debunked.

Statham was probably trying to say that he prefers action movies with practical stunts rather than CGI, but since much of his own audience probably overlaps with the audience for superhero movies, this probably wasn’t the best way to phrase it.

Also, he isn’t exactly making friends among the many actors who do make a lot of CGI-based Marvel movies.