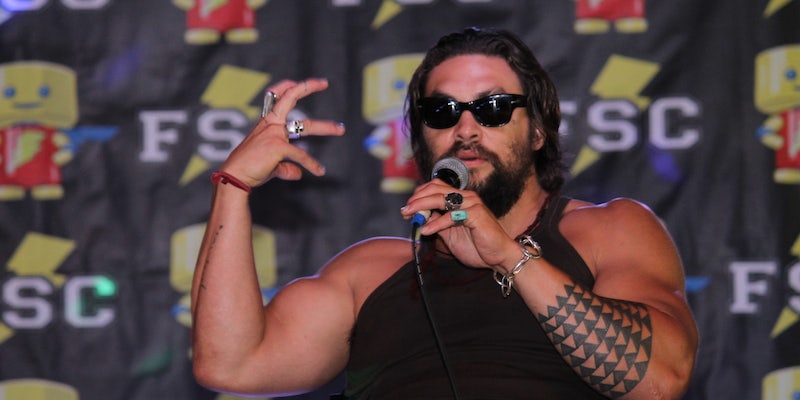 It's a very different look than we're used to seeing.

Batman v. Superman: Dawn of Justice director Zack Snyder has given fans their first look at Aquaman from the movie, and it’s safe to say that he’s not our childhood aquatic hero.

Ever since Warner Bros. confirmed that Game of Thrones’ Jason Momoa would be taking up the trident, there’s been much debate about what Aquaman would look like in the new Justice League films. How much of Aquaman’s classic green and yellow suit would be incorporated into the costume? Would he have blond hair? Would some cynical fans be able to put their bias against the hero behind them and embrace this new Aquaman?

Much of that has been answered with Snyder’s Twitter reveal, which shows a serious and gritty Aquaman.

Plastered around Momoa is the phrase “Unite The Seven,” likely referring to the seven members of the Justice League. Batman, Superman, and Wonder Woman have already been revealed, and Cyborg, the Flash, and Green Lantern already have movies planned in the next five years.

Momoa said months ago that his Polynesian heritage would play a role in how he would approach Aquaman, and you can see hints of that from the costume. Aquaman’s trident is still there, along with hints of the yellow and green. As with Batman and Superman, Momoa’s Aquaman is a much darker approach to the character—as well as a stark contrast with some of Marvel’s more recent films like Guardians of the Galaxy.

Snyder’s Aquaman is very different from the hero that people are used to seeing, but while the grittier versions of Batman, Superman, and Wonder Woman drew some criticism, the fans largely support this latest reveal.

Oh heck yeah. May this version of Aquaman put the Superfriends version out of mind for all. pic.twitter.com/avE0rW3c9Q

Alright.. It took a couple looks. But I've decided I like the new #Aquaman. pic.twitter.com/JF2aV4KE81

#ThatAwkwardMoment when #Aquaman is the coolest superhero in a movie about Superman and Batman. pic.twitter.com/hNBh67NCBn

Who is going to tell Ari Gold that Vinnie Chase isn't Aquaman anymore? I'm not. pic.twitter.com/RTrZz0wVBB

Thus far, my favorite nickname for Momoa's Aquaman is BRO-SEIDEN. Not mine, but I like it.

It is believed that Aquaman will appear in Batman v Superman, set to come out on Mar. 25, 2016, before helming his own movie, which should hit theaters in 2018.