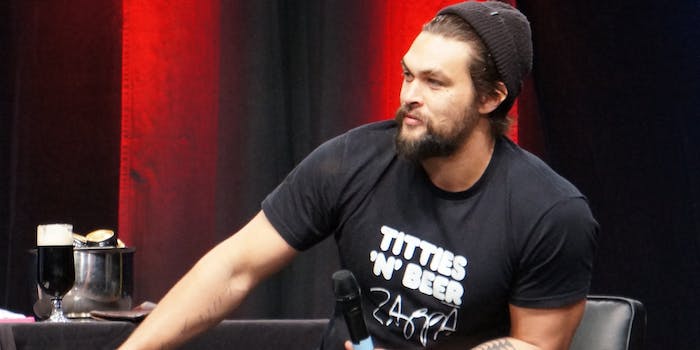 After denying he'd play Aquaman, Momoa is now allegedly diving into the role.

Jason Momoa has denied on multiple occasions that he’s in the running to play Aquaman, but it looks like he may just have been playing it safe.

According to a report from HitFix, the Game of Thrones actor has been tapped to play Aquaman in Batman v Superman: Dawn of Justice.

“I couldn’t even be more random for Aquaman, you know, with the blonde hair,” Momoa said at a convention last month. “I don’t even know where that comes from. It’s like me being Robin or something. Who pulls that out? I see that on the Internet and I’m like, ‘Aquaman?'”

However, HitFix’s new report reads, “While Warner Bros. hasn’t made that announcement officially yet, HitFix can confirm that he will be playing the part, and that Zack Snyder has already finalized his designs for the character so shooting can take place soon.”

The last attempt to bring Aquaman to wider audiences was a CW pilot inspired by the success of Smallville. It was never picked up for a full series, but that one episode was surprisingly popular on iTunes, and its star, Justin Hartley, went on to land the lead role in the CW’s Arrow. But we’re guessing that anything starring Jason Momoa and directed by Zack Snyder will have a very different tone from this kind of teen drama.

Along with the Flash, Aquaman is one of the core DC superheroes fans are predicting will appear in the upcoming Justice League movie. His role in Batman v Superman is likely to be a brief cameo introducing the character in time for the sequel, but either way, this casting news is pretty cool. A vanishingly rare instance of fan-casting rumors coming true.