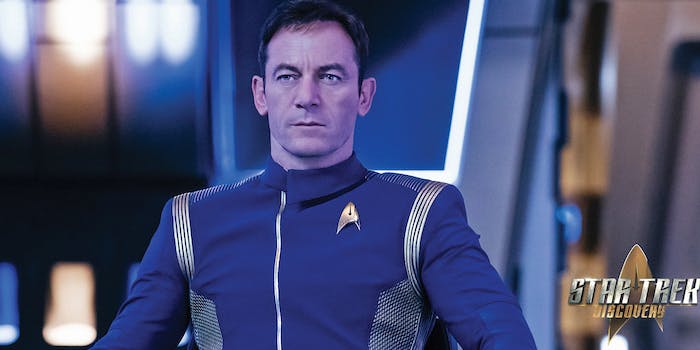 Star Trek: Discovery inspires a lot of backlash for a show that hasn’t actually aired yet. And unlike HBO’s Confederate, it isn’t even based on a controversial topic. Among other things, Star Trek fans have criticized Discovery for starring a black woman, looking too different from the 1960s series, looking too similar to the 2009 reboot, and banning actors from saying “God” on set. (That last one turned out to be untrue.)

So, it’s not entirely surprising to see a Discovery cast member lose patience with all the criticism.

The NY Daily News quoted Discovery actor Jason Isaacs saying, “I don’t mean to sound irreverent when I say I don’t care about the die-hard Trek fans. I only ‘don’t care’ about them in the sense that I know they’re all going to watch anyway. I look forward to having the fun of them being outraged, so they can sit up all night and talk about it with each other.” That’s a pretty accurate summation of Star Trek fandom, but perhaps not the most tactful way to win people over.

The article also suggested that Isaacs—who plays Discovery’s captain—will “throw away the legacy of William Shatner and Patrick Stewart,” prompting Shatner to repost the quote on Twitter.

Isaacs quickly jumped in to clarify, pointing out that he never disparaged Shatner’s legacy. In an earlier interview, he actually said, “If I thought, ‘Oh, do I want to be Bill Shatner or Patrick Stewart?’… I would have run crying and hidden in a cupboard.”

However, Isaacs also had a straightforward response for “offended” fans.

That said, for the few idiots offended enough to tell me
1) to go fuck myself and
2) they'll never watch
1) I'm my top choice
2) I dare you

Star Trek: Discovery experienced some well-documented problems behind the scenes, swapping showrunners during pre-production. That gave fans a valid reason to be concerned, but it’s worth remembering that every new Star Trek series has been greeted with doubt and dislike. The same thing happened with The Next Generation‘s first season, which was simultaneously criticized for being too similar and too different from the Original Series. Many sci-fi fans were similarly pessimistic about the Doctor Who and Battlestar Galactica reboots. Negative buzz is an inevitable result of any high-profile reboot, because fans have very clear (and wildly divergent) expectations for how the franchise should look.