This is deeply upsetting.

It’s no secret that Jar Jar Binks is one of the most reviled characters in modern film history, let alone in Star Wars. He’s an obnoxious, heinously racist caricature who’s been the top spot (or bottom) on endless “worst character” lists. When his death video emerged in 2013, fans actually celebrated.

So why is he pummeling Queen Amidala in the Star Wars March Madness competition? 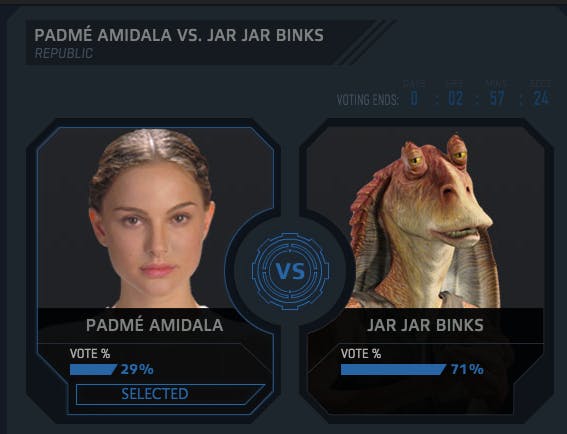 Fans have been handwringing all day over the inexplicable beating that Padmé is taking against Jar Jar. Twitter has been more or less beside itself:

Can't believe that anyone would vote for Jar Jar Binks over Padme Motherfucking Amidala. #ThisIsMadness (LITERALLY.)

Can someone please explain to me how it's possible that Jar Jar is beating Padme? https://t.co/LKJzr684GG

But not everyone was so quick to join the parade—despite a brief rally earlier in the day, Padmé is trailing further behind than ever.

@ohcatrina I dunno. The bad Padme Romance scenes in episodes 2-3 were a lot more painful then Jar Jar in Episode 1 to me….

Over on Wookieepedia, where StarWars.com encouraged fans to create their own brackets, the hatred was even more pronounced. 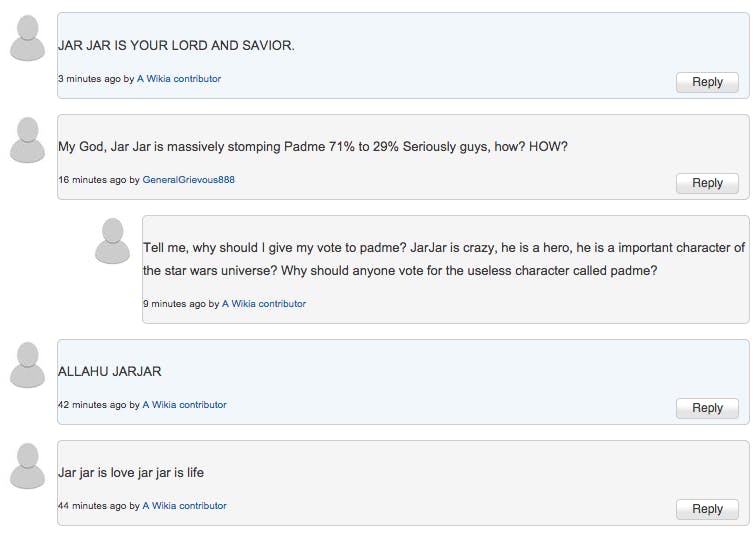 As frequently happens with online polls, accusations have abounded that fans on Wookieepedia and 4chan have been running scripts to generate the results they want in the challenge. That would be nothing new. The trolls of /b/, 4chan’s infamous “random: subforum, once had Mountain Dew naming a new flavor after Hitler.

Sure enough, over on 4chan, “Operation Jar Jar” was in full effect Thursday. The pranksters intended to make no-name Bib Fortuna and universally reviled Binks the two most popular characters in Star Wars history. The goal is to have these two face off in the final round. No Luke, no Vader, just Bib and Jar-Jar.

While the goal may just be to prank the results, it’s frustrating to see one of the only two main female characters in the entire franchise be subject to what looks like vote-rigging. So far in this first round, all of the female characters listed except Leia have lost—and she was paired off against another minor female character.

Not only is the message being sent that fans would literally rather vote for a racist stereotype than a female character, but it’s coming at the worst possible time. Geek girls are already protesting the lack of women-oriented merchandise for the upcoming franchise reboot.

For the love of Natalie Portman don't let Padme lose this horribly to Jar Jar or we'll never get any SW girl merch https://t.co/VGgRTyHSH4

“It’s important because right now, it looks like no one appreciates or even likes the female characters in [Star Wars],” wrote becauseofloki on Tumblr. “And since this voting is taken at least a little bit seriously, it could mean that we don’t get much more than the few female characters we currently have.”

Chin up, Star Wars fans. It appears StarWars.com is already weeding out the fake votes. Princess Leia faces off against R2-D2 in the next round, and if there’s anything that can send a message that girls in the fandom should be taken seriously, it’s watching our favorite overlooked Jedi Knight trounce everyone’s favorite droid.

This story has been updated with more information about 4chan’s raid.

Photo via inacentaurdump/Flickr (CC BY 2.0)