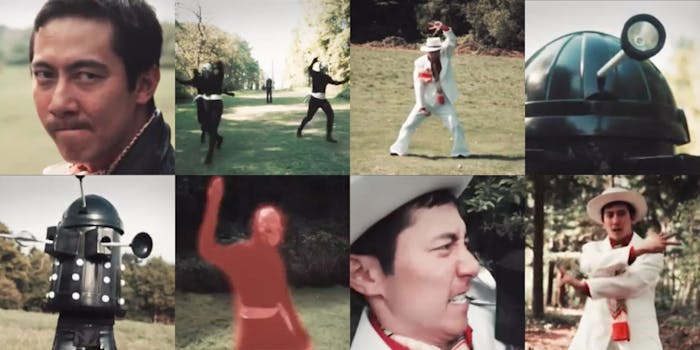 And we won’t even attempt to spoil the amazingness of the Doctor’s “sonic sword.”

This Japanese Doctor Who parody is one of those weird little pieces of Internet ephemera where you just don’t care if it’s a hoax or not.

On its own, a vintage Japanese Doctor Who video would be awesome. But to discover that someone in the 21st century managed to make such an accurate parody of old, low-budget Japanese action TV, well… that’s even more impressive.

This video has everything you could possibly want from a Doctor Who scene filmed in 1970s or ‘80s Japan. A pointless costume change. Shaky special effects. Men in black spandex catsuits pretending to be Cybermen. Some extremely slow kung fu. And we won’t even attempt to spoil the amazingness of the Doctor’s “sonic sword.”

The video showed up on lepoissonriuge’s YouTube channel on Tuesday, and has since been attributed to a filmmaker named Joshua Kahan. He’s presumably been getting a bunch of attention from Whovians over the past couple of days, as he felt the need to point out on Twitter that he puts on his Cyberman costume one leg at a time, just like everyone else. Good to hear that he’s not letting fame go to his head.