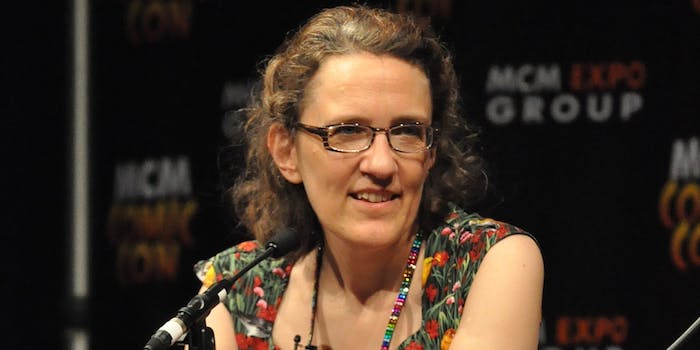 After ‘Buffy’ and ‘Battlestar,’ Jane Espenson continues a charmed career

Fans thank her for her work on Buffy and Battlestar, but Jane Espenson says she's the lucky one.

The chance to write compelling stories for engaging characters—whether they’re princes and princesses from classic fairy tales, teenagers battling vampires, or regular Joes—is an opportunity many writers can only dream of in the competitive TV industry.

Veteran writer Jane Espenson, however, has had the chance to do that and much more over the course of her career.

Espenson has written and produced for some of the most iconic shows to hit the screen, like Buffy the Vampire Slayer and Battlestar Galactica. While she’s currently writing for Once Upon A Time on ABC and Husbands, a web series she created with actor Brad Bell, Espenson hasn’t forgotten the renouned characters she’s had the chance to write for in the past. Her fans certainly won’t let her forget. She told the Daily Dot it feels amazing to know people still connect with these characters.

“The number of people—boys and girls—who say ‘The only reason I got through high school is because of Buffy is overwhelming. I attribute that all to Joss [Whedon], that was Joss’ doing. I’ve just been lucky to be on so many shows that have affected people like Battlestar Galactica, Torchwood, and Husbands, so many shows with positive images, positive messages, and Once Upon A Time which is all about hope, ” she said.

Espenson is a consulting producer and writer for ABC’s fairy tale drama and has already had the chance to work with characters from Disney’s newest hit Frozen. The appearance of the Frozen cast was teased at the end of the show’s season finale when viewers glimpsed Queen Elsa.

“I thought there was nothing more amazing than writing a line for Jiminy Cricket you know? It’s like, ‘Who gets to do that? That’s crazy!’ But then when you’re writing the character and you write the slugline Anna or you realize that the scene is going to have a reindeer in it, that’s even more amazing because that’s something you really never get to do is write a Disney-owned character from a movie that just came out,” she said.

Here’s another #OnceUponATime #titlespoiler — hope to see ya 9/28 for season 4! pic.twitter.com/0VKOkqDfxY

At San Diego Comic-Con the first clip showing the sisters was revealed. Since then, photos showing Kristoff and Sven have also surfaced. Espenson said she thinks the movie was a huge, modern, instant classic.

“I’m really overwhelmed with it. I think we all are, the whole writing staff was just like we couldn’t believe we were going to get to do this!” she said.

While Espenson adds to the list of iconic characters she’s had the chance to write for TV, her talents don’t end with portraying them on the screen. She’s also brought them to life on the pages of graphic novels and comic books. She’s written multiple Buffy the Vampire Slayer comics and adapted Husbands to the medium as well.

Espenson co-wrote the Husbands graphic novel with Bell and said they had a blast writing it. In the series they get to take the characters, play with sitcom tropes, and add winks to I Love Lucy and The Dick Van Dyke Show. The comic adaptation allowed them to add winks to superhero comics. Making the switch to putting these characters on the page isn’t easy, Espenson admitted.

“People think the big difference is writing for TV and writing for the web, but that’s exactly the same thing. Writing for any kind of television versus writing for a comic book is very different. It’s more like you’re directing than writing because you have to think for every panel ‘What does it look like?’ and you have to pare the dialogue down so much and think so much more about the shape of your story,” she said. “It did not come naturally to me but I feel like I finally sort of figured it out after many years. I feel like my comic book writing skills are finally where they should be.”

With her connections to so many cult-favorite projects on the screen and page, Espenson hears from fans in person and on social media, especially Twitter where she’s particularly active. Espenson said she has a lot of fun on Twitter—perhaps too much. At first she wasn’t getting any work done, so one of the most popular things she does on Twitter was born: writing sprints. Every once in awhile she will encourages followers to take one hour, get off Twitter, and completely focus on any task, whether it’s writing or something else.

Of course some fans are eager to know more about her shows. Many ask about the relationships between characters, particularly the possibility of queer relationships. Espenson said she’s delighted when fans write slash fiction about her characters. When a fan asked about queer canon at a Once Upon A Time panel in 2012, Espenson said she had asked what she could say on the matter and was told to say “You’ll have to keep watching.”

“Will there be any queer canon?” “I was TOLD to say you’ll have to keep watching.” WTF? 8 min in. https://t.co/SWaY6mvY @JaneEspenson #OUAT

One of Once Upon A Time’s major slash pairings is called “Swanqueen” and ships Regina with Emma. The creators have distanced themselves from the pairing in the past, similar to how other shows like Supernatural and Teen Wolf have distanced themselves from popular slash pairings. Teasing these pairings with no real intent to fulfil them is referred to as “queerbaiting” and has become a controversial topic in recent years. The relationship between slash fandoms and showrunners has become even more complicated and even resulted in shows losing viewers.

Espenson has admitted to queerbaiting in the past as a result of difficulty in getting networks to allow gay characters. When asked about how she’s seen things change since then and what she thinks of recent events, she told the Daily Dot, “It’s kind of sad, because sometimes you’re working within constraints that are either internal or external to your story.”

“You may just simply—because of things you’ve already established in your story or where you see the story going—may not want to explicitly make a character gay, but you may feel that subtext is appropriate for your story. So for example, in Buffy the Vampire Slayer the scene where her mother is saying, ‘Have you ever tried not slaying?’ Was that queerbaiting? We were using a gay metaphor, we were using a metaphor equating slaying to being gay that I thought was very powerful,” Espenson said. “If you say any time that something is not canon that it’s just metaphorical, it’s queerbaiting, then you lose that opportunity. Then I think it also scares creators away from taking their first tentative step into using a gay character. If they start with some subtext and are rebuffed they’re never going to go near it. So I think let’s have better assumptions about people’s intent. You know RuPaul who got some friction from using ‘Shemale‘ which was a pun he was using on the show. At a certain point it got to the point if you retweeted RuPaul people would say ‘don’t retweet RuPaul he’s transphobic.’ And it’s like, I really think the good RuPaul has done outweighs any infelicitous pun. Let’s go after the people who are getting it 100 percent wrong, not the people getting it 99 percent right, and I feel like ‘Let’s assume good intent.’ Then I think we’re far more likely to make progress.”

Looking back at her body of work and the characters she’s created that have touched so many, Espenson said she feels lucky to have been involved in so many of these projects.

“It’s amazing that people come up to me and thank me, and it’s like ‘All I did was what I wanted to do.’ I just wanted to write TV. I was lucky enough to have that happen and you’re thanking me? Like, I’m the one who had all the luck! The math doesn’t seem to add up,” she said. “I should thank everybody for watching the shows that I was lucky enough to get hired on so that the shows continued.”

Photo by Roger Murmann/Flickr (CC BY 2.0)