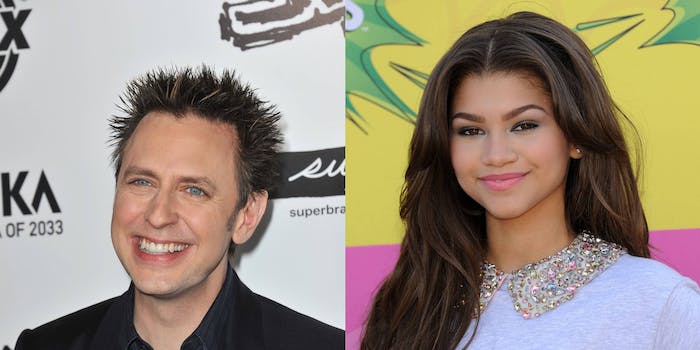 Dir. James Gunn comes out in support of Zendaya

'If you’re complaining about the ethnicity of Mary Jane your life is too good.'

Rumors are swirling about Zendaya being cast as Mary Jane Watson in the forthcoming Spider-Man: Homecoming movie. Though the decision has yet to be confirmed by either Sony or Marvel, previous casting announcements indicate a high likelihood we’ll be seeing the Disney Channel starlet on the silver screen.

Sadly, this has sparked outrage from some fans, who see the white, redhead Mary Jane as a character who should stay that way. One person jumping to Zendaya’s defense is Guardians of the Galaxy‘s James Gunn.

If you’re complaining about the ethnicity of Mary Jane your life is too good. https://t.co/b6XDUpRQ3i

The celebrated director took to Facebook on Friday night to pen a longer defense of more inclusive casting. Gunn describes being “bewildered” by a similar backlash that Michael B. Jordan faced when he was cast as Johnny Storm.

“The primary characteristic of Johnny was not, to me, that he was white, or that he had blonde hair, but that he was a fiery, funny, big-mouthed braggart of a hero,” Gunn writes. “I was happy that he was going to be played by one of the finest and most charming young actors out there.”

Gunn also stays mum on whether Zendaya has indeed landed the role of Mary Jane and is quick to clarify he has yet to receive confirmation.

“There’s a good chance someone told me at one time or another, but, if so, I can’t remember,” Gunn admits. “I’m going to find out when I go into Marvel this afternoon, but I feel free to speak until that time because it’s about the concept about a black woman playing Mary Jane, not the actuality or hypothesis of it.”