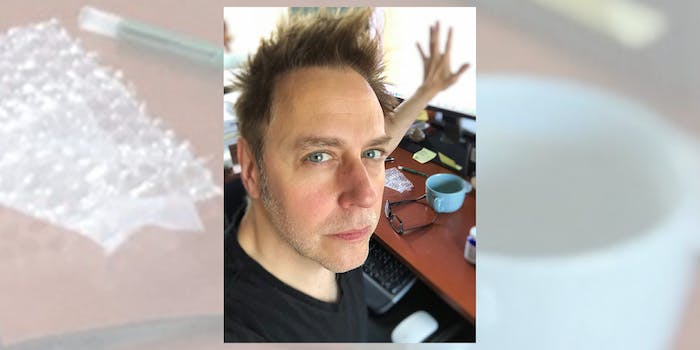 James Gunn’s ‘sneak peek’ of ‘Guardians of the Galaxy Vol. 3’s script has fans in a frenzy

If you squint hard enough, your favorite character will still be alive.

Fans can’t wait to see what’s next for the Guardians of the Galaxy, and director James Gunn is happy to keep stringing them along. Sneak peeks at the upcoming Vol. 3 script? You got it? Or, wait—maybe not?

Gunn is exercising some expert-level trolling on Twitter these days, offering faithful Guardians devotees “glimpses” of the upcoming Guardians of the Galaxy Vol. 3 script in various tweets.

Here’s another glimpse of the #GotG Vol. 3 script. #yourewelcome pic.twitter.com/EF8Ke1azsh

Except they’re not exactly “glimpses.” They’re pictures of Gunn doing everyday things, like sitting at his desk with his hand covering his computer screen that presumably has the script pulled up. Oh, thanks, we can totally read what’s on that blurred screen!

But fans aren’t giving up. They’re scrutinizing every single thing they possibly can in Gunn’s tweets. That desk’s color has to be some sort of clue as to what’s going on with Star-Lord and crew, right? And what about that bubble wrap? Clearly a sign.

The pen’s color is green. This could only mean one thing, Loki is alive. pic.twitter.com/rYE2hsMgWl

I used advanced CSI, zooming in, enhancing, and I got this. So pumped that Iron man's gonna be in it! pic.twitter.com/6ED5YesKDx

The bubble wrap has meaning, right? Does this mean we will be seeing them use the space suits more in this one?

These fans are seriously relentless, guys.

Death and life are linked. You can’t have death without life and you can’t have life without inevitably finding death. Is this dark? Why yes. Yes it is. But it’s true. pic.twitter.com/TYtMQVkO48

If you squint a little, you can see that Gamora is still alive.

Of course, the folks tweeting Gun about the potential “Easter eggs” hidden within his post aren’t all being serious. It’s a lot of lighthearted ribbing meant to lampoon Gunn’s propensity for secrets and other surprises embedded within his projects.

But it sure would be cool if he actually did have some sort of wild secret hidden within his tweets. C’mon, Mr. Gunn. Please?