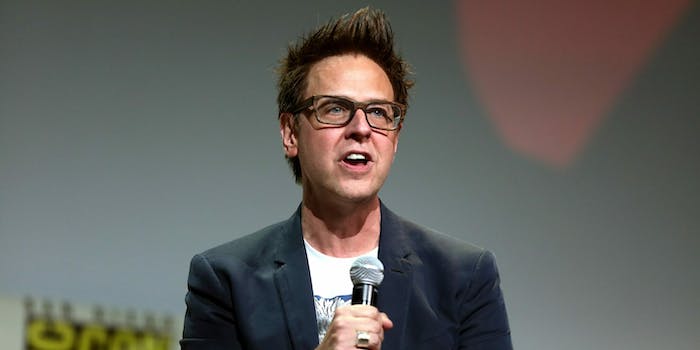 Disney reportedly doesn't care about the open letter from the cast.

The firing of Guardians of the Galaxy director James Gunn keeps getting more complicated. After the entire Guardians cast signed an open letter asking Disney to reinstate him for the third movie, recent reports suggest that the studio has no plans to reverse its decision.

Gunn was fired for posting offensive jokes on social media, a controversy that came with a couple of caveats: The jokes were from several years ago, and they only resurfaced due to an astroturfing campaign from “alt-right” trolls. In the wake of his firing, similar campaigns have targeted other anti-Trump celebrities like comedians Patton Oswalt and Michael Ian Black. So while everyone agrees that Gunn’s jokes were highly offensive, many believe he was fired for the wrong reasons. Hence, the groundswell of support from celebrity friends, Marvel actors, and a petition signed by 360,000 fans.

According to a new report in Variety, Disney isn’t interested in this backlash-against-the-backlash. Along with the fact that Disney boss Bob Iger signed off on Gunn’s firing, the report cites an anonymous source “close to the matter,” who says that Disney is unlikely to rehire Gunn because “those tweets were so horrible and Disney has a different standard than other studios.”

One of the key reasons people hoped Gunn would be reinstated is the ticking clock for Guardians of the Galaxy Vol. 3. Gunn shaped the look and tone of the franchise, and Marvel Studios follows a strict schedule. However, Variety says that Disney “feels no pressure” to find a new director immediately. The studio is waiting for an “A-list” filmmaker to come along, potentially a Marvel alum like Taika Waititi or Jon Favreau.

This sets up a new round of speculation for the future of Guardians of the Galaxy. Will Disney actually manage to find an “A-list“ director? It’s easy to imagine some filmmakers balking at taking over from Gunn, especially given the distinctive tone of the first two movies. It’s a different situation to the Thor franchise, where Waititi was given creative freedom to shake things up after the unpopular Thor: The Dark World. Fans expect the third Guardians movie to reflect the tone of previous films, meaning Disney is more likely to end up with a workmanlike director who can emulate Gunn’s style.