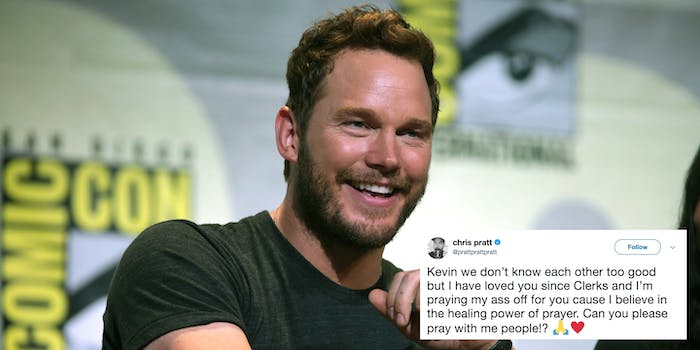 Guardians of the Galaxy director James Gunn came to the defense Chris Pratt after folks on Twitter criticized the actor for telling Kevin Smith—who just suffered from a massive heart attack—that he was praying for him.

After reading Smith’s tweets about his heart attack, Pratt reached out to the comedian on Twitter and told him that he was praying for his recovery and asked his followers to join him.

Kevin we don’t know each other too good but I have loved you since Clerks and I’m praying my ass off for you cause I believe in the healing power of prayer. Can you please pray with me people!? 🙏♥️ https://t.co/syB7BiQaoY

Praying for you. I will continue to. You inspired me with Clerks when I was a senior HS. I’m tagging my Lb/rb football coach who showed me the movie cause he believed in me and knew I’d be inspired. @hodge1916 🙏♥️🙏 https://t.co/syB7BiQaoY

The critics on Twitter lumped Pratt’s tweets together with those of politicians who call for “thoughts and prayers” after mass shootings and other catastrophic events. The original tweets appear to have been deleted, but a few of the critics kept their tweets.

Gunn saw all the hate directed at Pratt on Monday morning. He wrote a thread of tweets defending Pratt and pointed out the difference between Pratt’s prayers and prayers from politicians.

“There is nothing wrong with sending someone positive thoughts & prayers. But when this is coupled with inaction when action will benefit the situation, it’s empty,” he wrote. “If you’re offering Parkland shooting survivors prayers, but are unwilling to deal with the problems of gun violence in this country in a practical way, those prayers are empty.”

So I just read Chris Pratt’s tweet to Kevin Smith saying he would pray for him & made the mistake of reading the comments, many of which go off on Chris for saying he’d pray. I think people misunderstand the backlash against “thoughts & prayers.” (thread)

2 There is nothing wrong with sending someone positive thoughts & prayers. But when this is coupled with inaction when action will benefit the situation, it’s empty.

3 If you’re offering Parkland shooting survivors prayers, but are unwilling to deal with the problems of gun violence in this country in a practical way, those prayers are empty.

4 And if you’re going to offer prayers to the folks suffering in Puerto Rico, you might consider adding a link for a donation or calling on your representatives to take action, in addition to those prayers. Prayers alone will not change the world.

5 But no one expects Chris Pratt to shoulder doctors out of the way and perform heart surgery on Kevin Smith. Nor does Kevin need Chris to pay his medical bills. So I think his prayers are appreciated, and about all he can do.

6 I’m not tweeting this to defend Chris – he’s a big boy and can take care of himself. But for me, personally, prayer and meditation are great boons to my life and help me navigate my way through this world, and I don’t want to dissuade others who find those things useful.

7 I honestly would not be doing what I’m doing in either my career, or in speaking out on political matters, if I wasn’t led there through prayers and meditation. I feel lucky to have these tools.

8 I don’t think that means YOU need to pray. I don’t. There are many ways to navigate this life. Mine is only one of them. Prayer isn’t for everyone but, in the face of helplessness, it’s often meant as a acknowledgement that one cares (and we all care about @ThatKevinSmith).

9 If I am ever sick I will gratefully accept any of your thoughts and prayers. And will not be as grateful for some random fan knocking down my doctor and performing his own brand of kick ass surgery on me. Love to you all. Have a great week.

Critics also seemed to have overlooked the fact that Smith was raised Catholic and told the BBC in 2014 that he believes in God. He probably appreciated the prayers from Pratt.