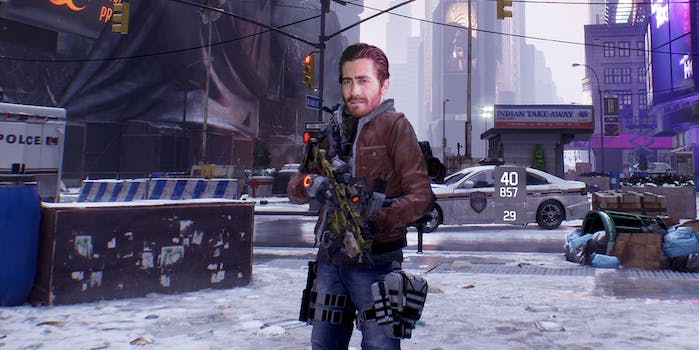 The Division movie adaptation starring Jake Gyllenhaal might not suck

This idea actually has potential, bad video game movies notwithstanding.

The video game The Division is what happens when The Bourne Identity meets Contagion or The Stand. In other words, The Division might make for an excellent movie.

Variety reported today that Jake Gyllenhaal is attached to star in and produce a movie based on The Division, a third-person, cover-based shooter that has become a massive hit for publisher Ubisoft, making an estimated $330 million in five days after its release on March 8.

The story behind The Division has all the makings of an action thriller. A virus with a 95 percent mortality rate is introduced into the middle of New York City on Black Friday via infected money.

When the game begins most everyone in New York is dead. Prisoners from Riker’s Island, former NYC sanitation workers who think the plague needs to be literally burned out of the city with napalm and private military contractors organized into an occupation force, have carved up mid-town Manhattan.

Players take the role of Division operatives, badass sleeper agents embedded into society all over the United States who are activated only when the government has collapsed and someone needs to maintain order. In the game, players take the city back from the various factions ripping it apart and try to help the survivors to rebuild their lives. They also have to figure out who designed the virus and how to develop a vaccine.

That sounds like a hell of a movie, doesn’t it? Video games unfortunately don’t have a track record of being good material for a movie no matter how cool the game’s story is. The new Warcraft film is currently sitting at a 24 percent fresh rating on RottenTomatoes.com. John Goodman and Paul Giamatti couldn’t save Ratchet & Clank from a pathetic 16 percent fresh rating. Last year’s Hitman: Agent 47 was an abomination at 14 percent fresh.

Ubisoft is still rolling the dice on not one but two movies based on its successful franchises. On May 11 a trailer premiered for the new Assassin’s Creed movie starring Michael Fassbender. The trailer was awesome, but you probably shouldn’t trust trailers for video game movies any more than you should trust trailers for video games themselves, which is to say not at all.

The trailers for Star Wars Battlefront were amazing, but the game was amazingly boring.