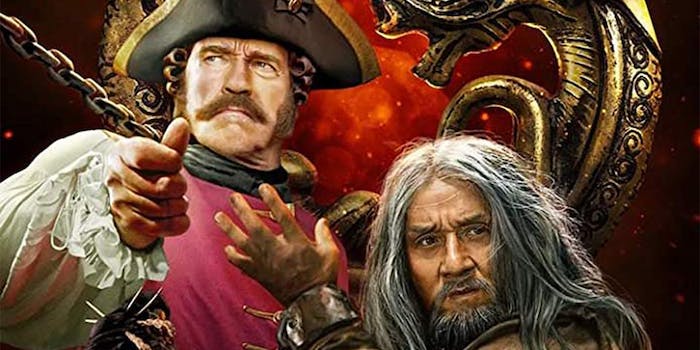 Arnold Schwarzenegger and Jackie Chan co-starring in a fantasy movie inspired by a 19th-century Russian novella, featuring a giant CGI dragon? It sounds like Reddit mad-libs, but it’s real. The Iron Mask comes out this spring, and the trailer makes it look absolutely ideal for your next so-bad-it’s-good viewing party.

The Iron Mask is actually a sequel to another movie, named Viy after the Nikolai Gogol novella. We’re going to go ahead and assume it doesn’t really resemble the original text, though. The Iron Mask (aka Viy 2: Journey to China) is a Russian/Chinese fantasy adventure movie starring Jason Flemyng in the lead role as explorer Jonathan Green. Jackie Chan and Arnold Schwarzenegger actually play supporting characters, but for obvious reasons, the trailer features them pretty heavily.

In case that wasn’t enough for you, the movie also stars Rutger Hauer and Game of Thrones actor Charles Dance. A true, old-school B-movie cast.

The Iron Mask already came out in Russia and China last year, and gets a digital release in the U.K. this April, so a U.S. release date is sure to follow.