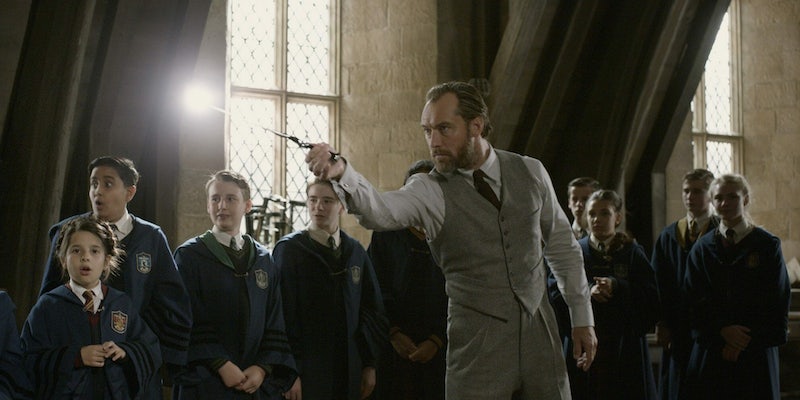 Is Dumbledore gay? Here’s why it matters

J.K. Rowling revealed the answer in 2007, but what does it mean for 'Harry Potter' canon?

In the years after the last Harry Potter book came out, Dumbledore’s sexuality became a bigger deal than anyone could have predicted. Is Dumbledore gay? Did he really love the dark wizard Grindelwald? What is canon, anyway? And since the Fantastic Beasts movies cover Grindelwald’s rise to power, will his relationship with Dumbledore finally be explored in detail?

In the hopes of answering these questions, we reexamined J.K. Rowling’s comments on the matter, backed up by their canonical background in the books and movies.

Back in 2007, Rowling dropped a bombshell: “I always thought of Dumbledore as gay.” Rowling’s comment was part of a question-and-answer session at New York’s Carnegie Hall in which a student specifically asked, “Did Dumbledore, who believed in the prevailing power of love, ever fall in love himself?” Here’s how Rowling responded:

“Dumbledore fell in love with Grindelwald, and that added to his horror when Grindelwald showed himself to be what he was. To an extent, do we say it excused Dumbledore a little more because falling in love can blind us to an extent, but he met someone as brilliant as he was and, rather like Bellatrix, he was very drawn to this brilliant person and horribly, terribly let down by him.”

This instantly set fans into a flurry of excitement and debate. Sure, Rowling said Dumbledore was gay, but if she hadn’t included it in the books or movies, did it actually count?

Why Dumbledore’s sexuality is so controversial

Obviously, some people objected to this revelation because they don’t want gay characters included in a children’s book. But alongside the homophobes, some of the backlash came from people who wanted Rowling to include queer characters in Harry Potter. They were frustrated because Rowling waited until after the books were finished to reveal that Dumbledore is gay. Why not include this in the official canon?

Dumbledore’s sexuality is the most famous detail that Rowling shared after finishing the series, but in the intervening years, it’s been joined by some more dubious revelations. Along with throwaway comments on Twitter (for instance, stating that the obscure background character Anthony Goldstein is Jewish), some of the later spinoffs include bizarre retcons that many fans would prefer to ignore. Harry Potter and the Cursed Child involves an elaborate time-travel plot with Voldemort’s secret daughter, and Fantastic Beasts: The Crimes of Grindelwald revealed that Voldemort’s snake Nagini was secretly a human woman all along. (It also includes a cameo from Minerva McGonagall years before her supposed date of birth, suggesting that Rowling has no interest in maintaining her own canon timeline.)

The debate over Dumbledore’s sexuality ties into the campaign for more diverse and inclusive casting in Harry Potter. In the same way that people were overjoyed to see Hermione played by a Black woman on stage, people want the Wizarding World to include queer characters. They want to see everyone represented in this franchise, instead of focusing exclusively on straight, white heroes. Since Dumbledore is the only character Rowling has described as gay, he’ll be a point of contention until the Fantastic Beasts movies explicitly confirm this onscreen.

The canon evidence for Dumbledore’s sexuality

Warning: This section includes spoilers for Fantastic Beasts: The Crimes of Grindelwald.

Is Dumbledore canonically gay? That’s a tricky question. His sexuality is a non-issue in the books, and many fans consider the books (and spinoff movies) to be the only official canon. So even if Rowling says he’s gay, her statements are meaningless unless the Fantastic Beasts franchise backs them up. Before that, all we have to work with is subtext.

In the books, the biggest hint regarding Dumbledore’s love life is the description of his old friendship with Grindelwald. We know they were close in their youth but later became mortal enemies, with Dumbledore finally defeating Grindelwald and imprisoning him for life. As young men, Dumbledore found Grindelwald fascinating as a rare intellectual equal and was briefly won over by his political ideas about wizarding supremacy over muggles. (Obviously, Dumbledore regretted this stance in later life.)

Harry Potter and the Deathly Hallows includes a letter that Dumbledore wrote to Grindelwald as a teenager, professing how glad he was to meet him. However, their relationship can still be interpreted as a close friendship rather than romance. In fact, it’s still unclear whether they were ever a couple, or if it was a one-sided thing on Dumbledore’s part.

Things are more overt in Fantastic Beasts: The Crimes of Grindelwald, although the film avoids making a clear statement about Dumbledore’s sexuality. So if you’re not familiar with the backstory and Rowling’s comments to the press, you might not realize that Dumbledore was in love with Grindelwald. The most significant moments are a scene where Jude Law’s middle-aged Dumbledore sees Grindelwald in the mirror of Erised (confirming that Grindelwald is his heart’s desire), and a flashback where they clasp hands while making a blood pact. Dumbledore describes their former relationship as “closer than brothers.” Neither can harm the other unless their blood pact is broken.

If you’re feeling cynical, you could interpret this as Warner Bros.’ way to satisfy people who support the idea of Dumbledore being gay while maintaining plausible deniability for more homophobic fans. Either way, Grindelwald is portrayed as Dumbledore’s greatest source of emotional vulnerability thanks to their complicated personal history.

Queer identity and homophobia in the Wizarding World

This probably won’t come as a surprise, but J.K. Rowling seemingly didn’t put much thought into the Wizarding World’s attitude toward homosexuality. While Harry Potter attracted many queer fans and inspired tons of fanfiction for same-sex pairings like Remus/Sirius, the books don’t include any openly queer characters. When asked whether witches and wizards are homophobic in a 2007 interview, Rowling said, “Now, that’s something I never thought of.”

She went on to suggest that wizarding attitudes would reflect contemporary muggle culture, although wizards ultimately care more about blood status. So someone like Lucius Malfoy would care more about a person being pureblood than being gay, kind of like how the British political establishment includes conservative, upper-class politicians who are openly gay. Rowling evolved her stance in recent years, describing Hogwarts as a safe place for LGBTQ students.

Judging by Rowling’s responses to questions about diversity in Harry Potter, she wants the Wizarding World to feel inclusive but she doesn’t fully understand how to make this work. For instance, The Crimes of Grindelwald is more racially diverse than any previous installment in the franchise, but it’s also riddled with racist subtext. Similarly, Rowling wanted to send a positive message by revealing that Dumbledore is gay, but this still hasn’t translated to visible queer representation onscreen.

Why Fantastic Beasts should confirm that Dumbledore is gay

At the moment, the relationship between Dumbledore and Grindelwald echoes the kind of romantic subtext we’ve seen with fictional duos like Holmes and Watson or Magneto and Professor X. The difference is, there’s a realistic hope that Warner Bros. will bite the bullet and clarify that it really is a romantic love story. This would be a groundbreaking move for queer representation because mainstream family blockbusters rarely include queer characters—and never in central roles like this.

Dumbledore is an iconic figure, and he could be the first gay character many kids see onscreen. On the other hand, Rowling and Fantastic Beasts director David Yates will have to tread carefully in their portrayal. Some fans feel uneasy about Dumbledore’s role, not out of homophobia, but because his story touches on some problematic territory. While he is a beloved character, Rowling’s comments suggest that he fell in love with Grindelwald at a young age, and then lived in celibacy for the rest of his life. He has friends and allies but he’s kind of a lonely figure, with few family ties or hints of other romances in his past. Does that send a positive message? To have Dumbledore fall in love with a murderous racist and then swear off romance forever? Of course, the movies could just introduce another boyfriend for him later on. It wouldn’t be the biggest retcon we’ve seen so far.

Disregarding the issues surrounding Dumbledore’s backstory, there’s a simpler way to look at this: If the new movies don’t explore his love life, there will be hell to pay. That’s because at the moment, Dumbledore’s sexuality is a clear example of queerbaiting. Rowling may have stated that he’s gay, and The Crimes of Grindelwald includes some heavy-handed hints, but this doesn’t actually qualify as meaningful representation. People are still waiting for this franchise to deliver.