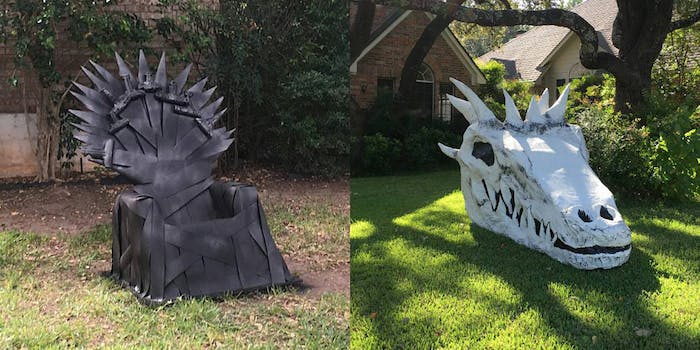 When being a ruler gets too hard, there's always Craigslist.

One cosplay queen Cersei in Austin, Texas, no longer has room in her life for a massive Game of Thrones–inspired chair, so she created a Craigslist ad to find a buyer.

In a quirky, poetic post, the seller explains that she’s ready to give up her tiresome life on the Iron Throne. Things just aren’t the same in the Red Keep after the deaths of her children and without her lover/brother Jamie, so she intends to move on to a simpler life in the burbs with a lover she found while swiping right.

But first, she has to get rid of some unwanted “baggage.”

“Before I embark on my next chapter I need to offload some physical baggage along with the metaphorical. Getting rid of this throne and skull ASAP. The big move to Tampa is next week.

$150 obo. Sold as set only. Used, slightly damaged condition. But aren’t we all?

While $150 seems like a fair price, there is a catch: The Iron Throne also comes with a massive dragon skull that cannot be sold separately. The buyer should be ready to cough up some extra cash for a U-Haul to get these two masterpieces home.