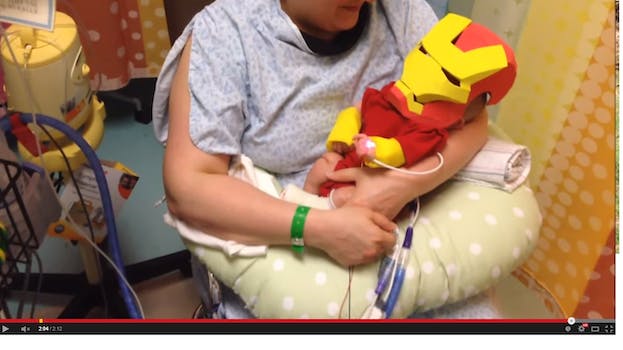 Sometimes all it takes to brighten a day is a comic book character's mask.

Proud new father Eric Hart was something no parent, old or new, wishes to endure: His tiny newborn son hadn’t left the hospital since he was born. So Hart did what any comic-book-loving father would do. He took a cue from a superhero who had also created something special out of an unfortunate medical situation: Iron Man.

Using a pattern he found online, Hart carefully created a custom Iron Man mask and suit for his son. The resulting costume is enough to make Tony—or even Howard—Stark smile.

Hopefully, Hart’s son has a speedy recovery. After all, the infant dressed as Whiplash on the other side of town is beginning to get a little reckless.