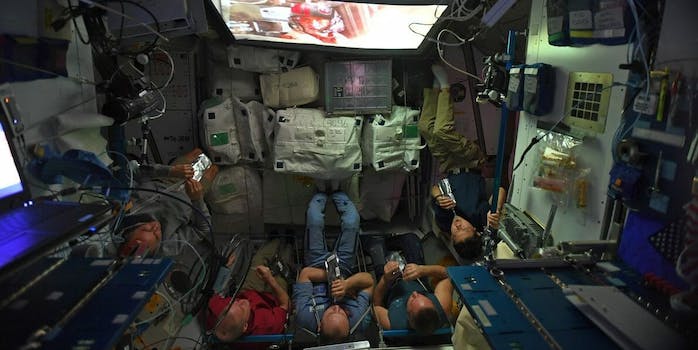 Watched on a screen far, far away.

What could be better for a die-hard Star Wars fan than to watch the latest entry in the franchise from space itself? That, according to reports, is what happened at the International Space Station on Saturday, as astronaut Mark T. Vande Hei posted a photo to Twitter showing a quintet of astronauts crowded around a TV screen which appeared to be playing Star Wars: The Last Jedi.

According to Mashable, a NASA spokesperson confirmed that astronauts on the ISS get access to digital copies of films, and they have a stable of sci-fi classics on hand. It doesn’t come as a surprise that they managed to get their hands on a copy of The Last Jedi; on Dec. 14th, one day after the film was released to the general public, NASA announced that the film would be sent to the ISS by Disney, just like they did for the release of Star Wars: The Force Awakens in 2015.

“Disney will uplink the film to the space station through mission control at NASA’s Johnson Space Center in Houston,” the NASA statement said. “Expedition 54 crew members, including NASA astronauts Joe Acaba, Mark Vande Hei, and soon Scott Tingle, look forward to watching the science fiction saga at their leisure while they’re living and working aboard the orbiting laboratory that will enable human and robotic exploration of galaxies far, far away.”

Unfortunately, the astronauts haven’t yet offered a review of the movie, so there’s no telling how it went over. So far, The Last Jedi has proven to be viewed quite differently by critics vs. audiences, with a stark divide between user reviews and critical reception. Hopefully the astronauts who got to see it on Saturday enjoyed it to the utmost—at least, because you really can’t get a more authentic viewing experience than watching it while in orbit.