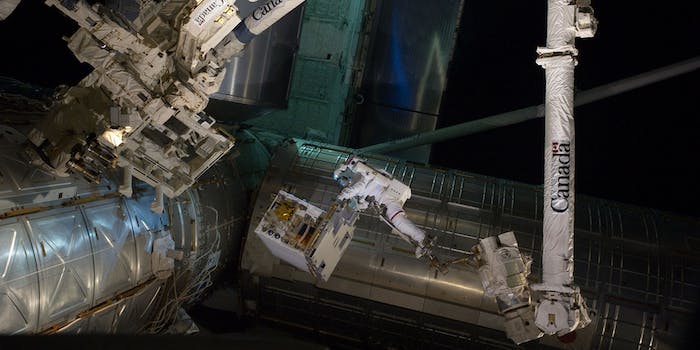 For those that have ever wondered what it’d be like to take part in a spacewalk outside the International Space Station, today is your lucky day. Right now you can join cosmonauts Alexander Skvortsov and Oleg Artemyev during their spacewalk, thanks to a live feed on NASA Television.

The cosmonauts left the space station early Thursday morning to start a six-and-a-half-hour job of switching out science experiment gear and installing an antenna, relocating a cargo boom, and swabbing samples from a window on the Zvezda service module.

NASA’s been updating people about the walk via Twitter since it started.

Lovely day for a spacewalk. Are you watching? http://t.co/RYQyn5Md5P http://t.co/Sy0NN1WE2l

This event marks the 180th spacewalk from the International Space Station. Watch the live stream below.