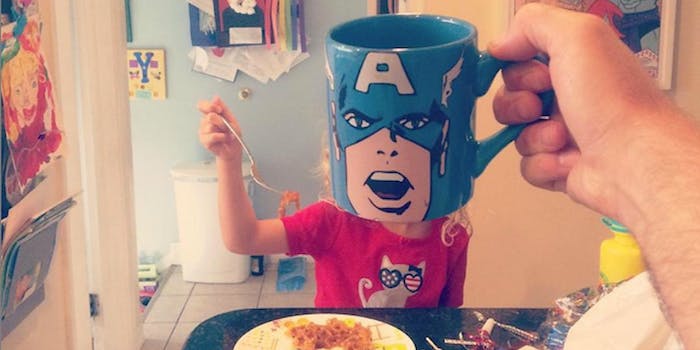 Awesome dad takes hilarious ‘mugshots’ of his kids as superheroes

This is the best kind of dad joke.

With the help of an awesome pop-culture mug collection, Lance Curran has succeeded in making breakfast a little geekier for his kids.

Curran, a warehouse director for Threadless, turns his children into superheroes and other familiar characters by obscuring their faces with character mugs. The resulting photos makes it look like Captain America, or the Joker are sitting down for a bit of breakfast.

Curran shares the photos on his Instagram page using the hashtag #BreakfastMugshot. His pictures don’t just feature the kids at the breakfast table either. Some mornings Batman just wants to play video games in Hello Kitty pajamas, right?