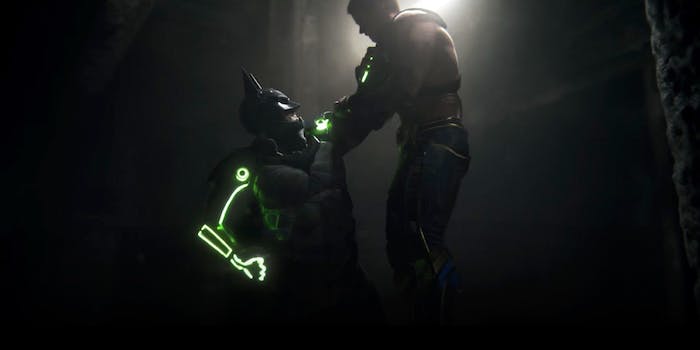 Who is he fighting? Hint: It isn't Superman.

The DC Comics cinematic and television universes aren’t the only places where you’ll find DC superheroes beating the crap out of each other.

Warner Bros. on Wednesday released the first trailer for Injustice 2, the fighting game that lets players pit DC Comics characters against each other. Surprisingly, Batman doesn’t wipe the floor with everyone in the trailer—because of course that’s what would happen in the real world, but this is just a video game, right?

Injustice 2 is the sequel to Injustice: Gods Among Us. The premise of the first game was an alternate DC timeline in which Superman sets up a world government in order to maintain peace on Earth after the Joker blows up Metropolis with a nuclear weapon.

Batman won’t let this stand, of course, so he rallies a bunch of heroes to fight Superman. After some more alternate-universe-hopping, the story of the first Injustice wraps up with evil Superman down but not defeated.

Injustice 2 begins with Batman trying to pick up the pieces after the first game’s epic final confrontation. We’ll likely know more next week at E3, when Warner Bros. will be showing off its new games.

Injustice 2 is slated for a 2017 release on PlayStation 4 and Xbox One.