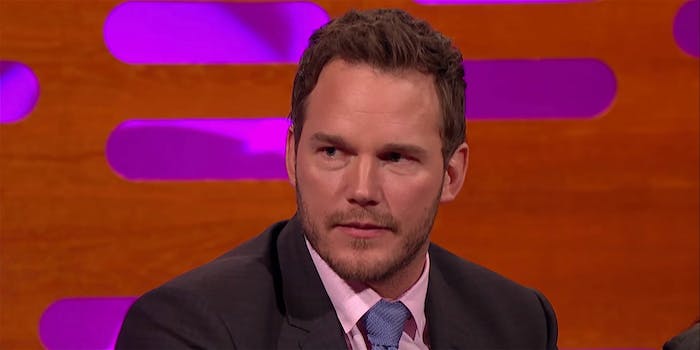 When Chris Pratt posted a photo of himself fishing to Instagram on Friday, one user commented: “How tf u gon kill the Avengers like that bro.”

Pratt’s post was innocent enough, but what happened in the new Avengers: Infinity War movie was anything but OK in the eyes of some viewers. According to BuzzFeed, fans are having a hard time coming to terms with the movie’s ending—and they’re also having difficulty mentally separating Pratt from his character.

Pratt’s character, Star-Lord, ends up being the one to cause a major body count at the end of the film. The death toll includes Spider-Man, Black Panther, Bucky Barnes, Doctor Strange, Mantis, Drax, Falcon, Scarlet Witch, Groot, and Star-Lord himself. And that is way too many deaths, according to fans.

So naturally, Avengers fans are taking to Pratt’s Instagram comments to express their anguish.

Still reeling from the #avengers premiere last night. The movie is SOOOOOO GOOOOD!!!! Loved it! Absolutely loved it. Couldn’t be more proud and honored to be part of this unprecedented cinematic event. I’m living the dream. Always love meeting all the cosplaying fans. Here’s a young Nebula. Awesome! What an amazing night.

“I hate you but I still love you,” one fan commented on Pratt’s photo from the Infinity War premiere, which took place in early April.

From his photo feed, we can see that Pratt is now enjoying time on his farm with his son. Some fans are looking at the cute photos of sheep and wondering whether they should let Star-Lord get away with the crimes he has committed.

“I STILL BLAME YOU FOR EVERYTHING” was one sentiment posted in Pratt’s comment section. “I’m not mad at you. But I’m disappointed in your actions,” was another.

Others are pissed that Instagram users are commenting spoilers.

“You’re ruining the film for people who haven’t had chance to see it yet,” one user scolded.

Not even Twitter is safe from spoilers, memes, and prosecution—or defense—of Pratt.

We know Star-Lord was flattened to dust at the harrowing end of the new Avengers movie, but we didn’t know he would be murdered a second time on his own social media.