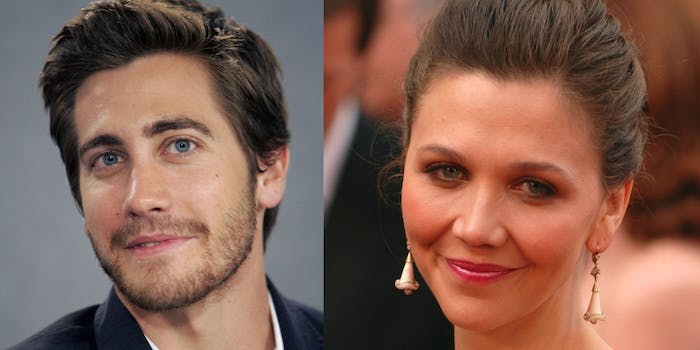 In defense of Gyllencest and incest fanfiction

The examples they uncovered were a handful of what’s called RPF, or real-person fiction, posted no more recently than 2005—10 years ago—on LiveJournal, a site whose English-speaking side is now almost totally dead apart from celebrity gossip site Oh No They Didn’t.

I’m begging you not to be alarmed by a thimbleful of made-up stories about celebrity siblings. Nor should you write off the genre as a frightful sideshow attraction in fandom.

What you need to understand about RPF

RPF, you might be surprised to know, has a long and glorious literary tradition dating from the days of the Iliad on down through the centuries, to narratives like Band of Brothers and The Kennedys.

RPF is arguably one of the most legitimized forms of literature in human history.

And the single most important fact about RPF is this: It has absolutely nothing to do with the real, literal subjects about whom it is written.

Fictional characters have absolutely no relationship to the real person whose name is attached.

King Henry V never actually said, “Once more unto the breach, dear friends,” and in real life, he almost certainly never plotted to pretend to be a prodigal son until he could miraculously rebrand himself as England’s bright new hope. But that didn’t stop Shakespeare from using his life as fodder for one of the most celebrated fictional narratives in history, Henry V.

One of the reasons it’s not obvious? Maggie and Jake are alive and among us, while Henry and his other royal counterparts were well in the ground when faux-historians like Shakespeare got their hands on them.

Shakespeare, writing about the long-dead Henry, made a point of writing about a celebrity prince hiding behind a carefully cultivated persona. Shakespeare’s fictional Henry chose to deploy his persona for purposes of concealment and strategy—and he didn’t have a thousand flashbulbs trained on him at any given moment.

Four hundred years later, modern-day RPF, as written by actual writers of fanfiction, is similarly concerned with the interplay of personas and personality, of celebrity and private life, and fantasy and reality. Queer writers of fanfic add an additional layer: RPF focused on queer relationships often tends to explore in depth the price of being publicly out as a celebrity. I am an avid writer and reader of RPF fanfiction. I love it for all of the reasons I just mentioned.

To say that RPF, “real person fiction,” actually impacts real people is a bit like saying that Ridley Scott’s Alien is currently having a direct impact on the search for extraterrestrial intelligence. In exactly the same way, fans who are writing about Maggie and Jake Gyllenhaal on LiveJournal or elsewhere are not actually impacting the real actors whose names get attached to their fics.

Here is what actually happens in the production of RPF. Actors and other celebrities create fictional personas, publicly accessible versions of themselves that are necessarily removed from their real identities. The actors then make those personas available to the media. The media then represents them to the public, albeit through a heavily distorted lens.

In fandom, fans receive those personas, now twice removed, and then begin to dismantle, explore, peruse, and investigate them through the self-aware lens of fanfiction. In essence, the characters being written about in RPF are literally just that: fictional characters with absolutely no relationship to the real person whose name is attached.

Fanfic authors are hyper-aware that the characters they’re writing about are at least three times removed from the people they’re ostensibly portraying. And publishers are aware of it, too: After all, there’s a reason that publishers have made One Direction fanfiction their next great gold rush after the success of Fifty Shades of Grey. Unlike the many fanfics turned original novels that sprang out of the Twilight fandom, there’s no contentious risk of getting sued by a previous copyright owner when you convert a work of RPF into a published novel. After all, you can’t claim a case of copyright infringement about a character who never existed to begin with. Right?

This removal is essential to RPF, no matter what kind of RPF it is.

So. Now that’s got out of the way, let’s talk about incest.

Well, yes, incest itself is wrong. But incest as a literary trope?

Here is a thing that’s obvious: We live in a society that enforces rigid moral codes while mocking and shaming narrative tropes, particularly women’s literature and genre fiction, that explore the boundaries of those moral codes.

Here’s another thing that should be obvious, but isn’t, because of the aforesaid handwringing over subversive literary tropes. Incest tropes as they are used in literature have nothing to do with actual incest.

Think about it. The vast, vast majority of readers and viewers who turned Flowers in the Attic into a worldwide bestseller or Veronica Mars into a cult hit were not remotely thinking about using either of those narratives as a template for shagging their own sibling and/or other relative. The longstanding assumptions that stories like Wuthering Heights, “The Fall of the House of Usher,” and Hamlet contain incestuous elements have not been solely made and argued throughout the years by fans of real-life incest. That’s not how we react and respond to incest in fiction.

As a literary trope, incest is a way of exploring social taboos, of indulging the reader’s need to break out of rigid social structures. Often the realization of an incestuous romance in fiction has a component of deep catharsis and release of tension for the audience. The fictional incestuous relationship serves to allow readers a way to deconstruct and examine a wide variety of societal roles, including familial and class relationships.

Academic Prof. Catherine Tosenberger has written extensively on the use of incest narratives within fanfiction. Tosenberger observes the large amount of incest fanfiction in the Harry Potter fandom and notes that it harkens back to age-old narrative tropes about incest in fiction:

Incest in popular narrative is often associated with the highest and lowest strata of society. Many mythologies, including Greek, Roman, Egyptian, and Indian contain examples of sanctioned divine incest: “The view of incest as an act denied to men but permitted to the gods is a staple of ancient mythology where the heavens are populated by precisely the kind of breeding forbidden to men” (Twitchell 43). By extension, the highest echelons of human society, royal dynasties, have traditionally married relatives of varying closeness in order that their blood and property not be sullied by admixture with those of less exalted rank: “Incest eliminates the admission of a stranger into an established bloodline—a crucial point when that bloodline is already deemed optimal” (Ford 7). At the same time, incest is also popularly figured to be a problem of the poorest of the poor, whether rural hillbillies or urban slum dwellers. The linking of incest with the lowest rung on the social ladder is often contradictory: hillbilly narratives point to rural isolation as the culprit, while overcrowded conditions are blamed for incestuous acts among the city poor.

When Angelina Jolie took her stepbrother, James Haven, to the Oscars in 2000, the media was all too happy to indulge the time-honored incest narrative. In 2011, over a decade after that incident, the Daily Mail was still doing its best to spin the Jolie-James kiss into something more, claiming, like this Daily Mail story did, that “Brad [Pitt] is very relieved that James has a distraction to stop him from taking such a strong interest in what Angelina was doing.”

When fans adhere to a longstanding tradition of using literary incest tropes, they’re “disgusting” and “gross.”

So. When the media implicates royal celebrity siblings in incestuous relationships, solely for titillation and clickbait, it’s just journalism.

When fans adhere to a longstanding tradition of using literary incest tropes, they’re “disgusting” and “gross.”

It might be more productive to ask why, when the media wants to lazily shock or titillate an audience, one of the first things it continually looks for is fringe fiction written and circulated within Internet subcultures. Parents, look at what your teens are doing on the Internet! Want hits? Write a horrified piece about furries, or the members of the Otherkin community, or all the minotaur erotica in Kindle ebook singles.

It takes time, care, and, above all, respect to objectively look at these narrative tropes and figure out what’s really going on with each of them.

But it’s really not that hard to do. Because nearly always, these tropes are about exploration of cultural norms in the context of individual identity and pursuit of romance. Frequently, the fictional boundaries of these kinds of fics also allow for a much-needed exploration that allows actual victims of sexual assault to deal with and cope with their assault in safe, comforting ways. This is a role that other kinds of fanfiction involving consent issues can play as well. For us to pass judgment on these kinds of fanfics without having any knowledge about the personal motivation behind them, or the level of liberation they’re providing to readers and writers, is a prime example of society’s systematic shaming and marginalization of subversive literature.

Ultimately, any attempt to judge these kinds of subversive tropes will prove outdated and moralistic, as stuffy and confining as the social codes incest fiction is reacting against. Incest fanfic might be an easy target for mockery and shame, but it is also the newest phase of an ongoing evolution of time-honored literary tropes. One fan’s Cersei/Jaime is another fan’s Maggie/Jake.

And there’s absolutely nothing wrong with that.