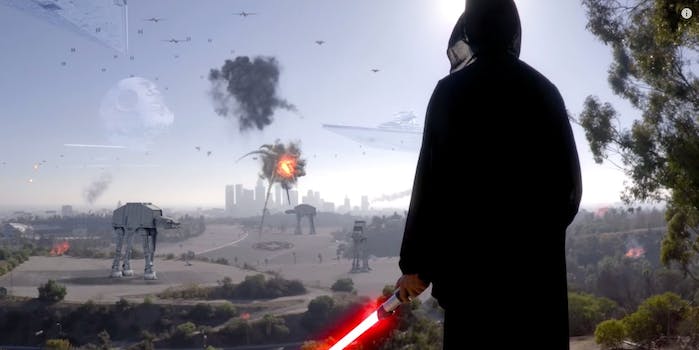 What would it look like if Imperial Forces invaded Los Angeles?

The dark side descends upon the City of Angels.

After wreaking havoc on worlds in galaxies far, far away, it was only a matter of time before the Imperial Forces of the Star Wars universe set their sights on Earth.

Kaipotainment’s amazing YouTube video shows tie fighters, AT-ATs, and of course a Sith Lord terrorizing the citizens of Los Angeles. The video has it all: fighters soaring over LAX, an AT-AT on the beach. There are also a handful of Easter eggs that call out to the world beyond George Lucas’s vision. See how many of them you can spot.

Kaipotainment’s video has already earned more than 23,000 views. And thankfully, they were kind enough to also upload a behind-the-scenes video showing how they merged the Star Wars universe with the country’s second largest city.

Has anyone checked New York lately for signs of Yoda?