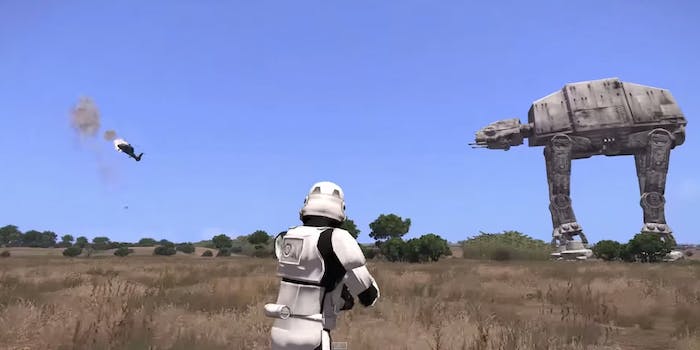 A U.S. military helicopter takes on a ‘Star Wars’ AT-AT

If not for orbital bombardments, the Empire from Star Wars might have trouble dealing with a professional, modern-day Earth army. At least that’s what a premiere military simulator has to say about it.

Arma III is a simulator, not a run-and-gun military first-person shooter like Call of Duty, or a combined arms exercise like Battlefield. Arma III tries to replicate arms, weapons, and even uniforms in a genuine, real-world fashion. Which of course makes you wonder why someone modded Arma III to include Star Wars‘s Imperial All Terrain Armored Transport.

But we’re glad YouTuber McRuppertle created an AT-AT mod for Arma III, that also includes an Imperial Stormtrooper skin and what sounds like an authentic Imperial-standard BlasTech E-11 blaster rifle. Now we can see what it looks like when an AT-AT takes on a helicopter gunship.

Arma 3 is available for PC on Steam. McRuppertle’s AT-AT mod is not, but we can always dream.