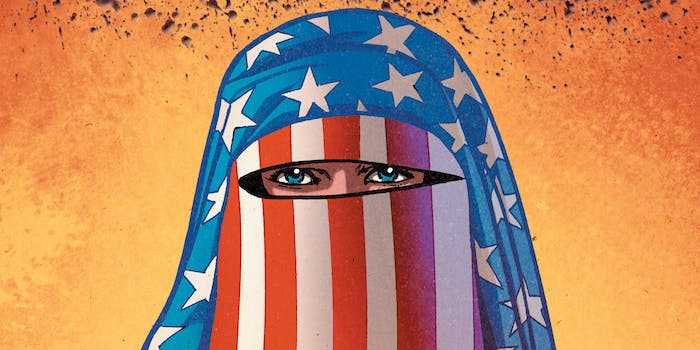 Photo via The Divided States of Hysteria/Image Comics

It’s LGBTQ Pride Month, and Image just published a comic where a transgender character is violently assaulted by men who paid her for sex.

The Divided States of Hysteria is a political comic by writer and artist Howard Chaykin, whose career spans decades of work at Marvel, DC, and various indie publishers. It takes place in a near-future setting where the president was recently assassinated, and issue #1 opens with plenty of sex, terrorism, police brutality, and overall cynicism. Edgy political comics are far from unusual (and this one doesn’t exactly feel fresh in 2017), but it gained attention for the transphobic slant of one particular scene.

The first issue introduces a transgender sex worker who is only referred to by her birth name, Christopher Silver. Three men pay her for group sex, but when they find out she has a penis, they beat her until she reaches for a gun and murders them. She gets arrested in bed with their naked corpses, and the scene concludes with a mugshot of her beaten face. Published during Pride month with a Pride variant cover, the comic was roundly criticized by the comics community on social media.

Shortly after the comic came out last week, Image responded by posting an essay by writer/artist Howard Chaykin. The essay opens with several paragraphs about the 2016 election, and continues with a diatribe against trigger warnings and “social justice warriors.”

“So instead of “Trigger warnings,” “Cultural appropriation,” “Safe spaces,” and “Social Justice Warriors,” maybe we on the left should have put aside all this balkanizing nonsense and been fucking Americans for fuck’s sake, instead of allowing this nihilistic shithead to mainstream and legitimize the racist, sexist, bigoted and flat-out moronic sensibilities that have always been there, but were held in check by a common understanding that one doesn’t get away with that shit in the United States of America.”

The Divided States of Hysteria is actually an ideal example of something that would benefit from trigger warnings. Its depiction of a transgender woman is very stereotypical, with a cavalier attitude to the realities of transphobic violence. To readers who have experienced transphobia themselves, a trigger warning could prevent flashbacks or other repercussions of real-life trauma.

The controversy continued over the weekend, exacerbated by Image’s decision to double down in support of Chaykin’s comic. Then on Tuesday, the publisher shared a second response.

The post is a press release celebrating issue #1 going to a second printing, and it describes the backlash as a “conversation.” It includes a quote from Image editor Eric Stephenson, who says, “One of the things I’ve always admired about Howard’s work is his unflinching reluctance to pull any punches… If you’re looking for escapism, this probably isn’t the book for you.”

He adds that the comic is “intended to provoke thought about how and why things have reached a state where the tools for progress—discourse, understanding, cooperation—are shunned in favor of treating anyone with an opposing viewpoint as an enemy combatant.”

This puts Image in an awkward position. By handwaving the criticism of The Divided States of Hysteria, Image supports Chaykin’s desire to be an edgy provocateur, ignoring readers who were offended or hurt by his work. But Image isn’t a small indie press, it’s America’s top publisher of non-superhero comics. It publishes mainstream hits like Saga and The Wicked and the Divine, which feature queer characters and have many queer fans. At the same time, Image is celebrating Pride month with a series of variant covers, whose proceeds go to the Human Rights Campaign.

Image is free to publish whatever and whoever it wants, and readers are free to respond accordingly. But it’s hypocritical of Image to market itself as a queer-friendly business, while defending a comic with harmful stereotypes of transgender people.

The Daily Dot has reached out to Image Comics for further comment.

“The trans character, Chrissie, is a survivor, not a victim—and a survivor who takes vengeance. In shining a spotlight on the all-too-real dangers inherent in an ugly and unjust world, THE DIVIDED STATES OF HYSTERIA content is indeed disturbing and provocative, which is why we rated it M for Mature. While there are uncomfortable and graphic scenes in THE DIVIDED STATES OF HYSTERIA, Chrissie’s violent experiences are a devastating example of what many in the LGBTQ community are forced to deal with in an intolerant society. There is more to this particular trans character than that single experience, though, and we encourage readers to follow Chrissie’s fully-realized story arc as it develops over the course of the series. Regarding the comic’s Pride variant benefitting HRC, the intention was to highlight Chrissie as one of the series’ key players, because it’s rare that trans characters are featured as prominently in comics. However, we realize that the dark nature of the material is at odds with the celebratory nature of Pride Month and apologize for not considering that beforehand.”