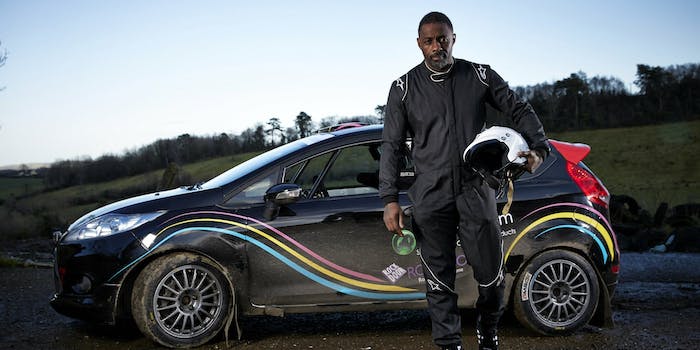 Is this a story where the character's original ethnicity matters?

The film adaptation of Stephen King‘s popular fantasy series The Dark Tower has long languished in developmental hell. But now Deadline reports that Idris Elba is the rumored frontrunner to play the lead character, the Gunslinger Roland Deschain.

This should be good news for fans who have been waiting years to see this story hit the big screen. But not everyone is happy—particularly fans who worry that changing King’s original description of the character’s appearance might actually alter the storyline.

The project, backed by Sony, already has some star power behind it: If chosen for the role, Elba would be facing off against Matthew McConaughey, who’s reportedly in talks to play the antagonist, the Man in Black. Nikolaj Arcel (A Royal Affair) is directing.

Most famous for playing Stringer Bell in The Wire, Elba has had a solid slate of roles in geeky franchises, and has long been fandom’s perennial frontrunner to play the next James Bond. Elba has been long denied a major starring role in a blockbuster, so his being cast as the Gunslinger should be fantastic news for those fans.

But like James Bond, Roland Deschain is a character who was originally written as white. Once again, Elba would be playing a racebent role. In their excitement, some fans braced themselves for the kind of racist backlash from the Internet that often follows such racebent casting announcements. And soon enough, some Dark Tower fans started to complain about Elba’s casting.

@ruzkin @Deadline taking the character modelled after Clint Eastwood and making it Idris Elba? Nope. I'm out then.

I'm sorry, but this all kind of confuses me. I have nothing against Idris Elba, but Roland just isn't black. And… https://t.co/rh1xkzWBS9

A character’s race doesn’t always play a role in the film, but some fans are arguing that in the case of Roland, it does.

“I could maybe understand it if the ethnicity is hardly mentioned and completely unimportant, but come on,” wrote one redditor on the site’s r/StephenKing subreddit, which hosted a lively debate about the casting decision. “Roland has blue eyes, is said by King to be inspired by Clint Eastwood, and a whole arc in one of the books relies on him being white and Susannah being black.”

Multiple fans argued that changing Roland’s ethnicity would alter his relationship with Susannah/Detta, another main character who has yet to be cast. In the Dark Tower books, Detta is a black woman who initially treats Roland with hostility and calls him a “honky mahfah.”

While plenty of fans love Elba in the role, some held that Detta’s tense attitude toward Roland, a key component of their relationship, would be lost if Roland were likewise cast as black.

Idris Elba to play a white man who is called a "Honky Mahfah"? I like Idris but him as Roland in The Dark Tower does not work.

Dialogue between Roland, the white man, and the books lead black female Detta involving her hatred for white people.

But that issue leaves fans with a complicated question, one for which they may not have an answer: Should authenticity to the source material trump the need for diverse representation in media?

The Roland/Detta relationship would be a factor that the screenwriters would have to work around. Nerds of Color‘s Shawn Taylor has previously argued that Elba deserves better franchises than the Bond films. In reaction to the latest news, he speculated that Elba’s popularity, and the way his name keeps getting attached to any project that comes along, is part of a bigger problem:

As much as I am #TeamIdris, I think that I’ve reached “peak-Elba” in geek/nerd spaces. Every franchise that is announced — especially anything in the SF/Fantasy/Action realm — Idris Elba is mentioned as a possible lead. Is it because he is handsome, charismatic, built like a traditional (stereotypical) Hollywood man, can act his ass off, and has a gravitas that most other actors would kill for? Or is it because there is a dearth of fantastic properties for people of color (in this case men of color) to both star in and experience that we find ourselves participating in the laziest form of diversity and inclusivity because POC aren’t being served in this way?

If more actors of color were under consideration for more A-list projects like this one, it’s possible this question of authenticity wouldn’t even be an issue. Fans like Taylor argue that Elba’s presence conveniently fulfills an increased demand for diverse representation because few other black actors have the same cache with fans and in the industry.

And he also makes fans happy. By potentially casting Elba, Sony reaches a wider pool of people who never cared about The Dark Tower before, but who do care about representation. For the moment, anyway, that’s a win for everyone.

Damn, if Idris Elba is seriously going to be the lead in The Dark Tower, I'm very interested in that franchise all of a sudden.

The Dark Tower with Idris Elba as The Gunslinger vs. Matthew McConaughey as The Man In Black?! https://t.co/IuLyBGcI6x HASHTAG YES PLEASE