If you've longed for the JRPGs of yesteryear, I Am Setsuna is for you.

If you eavesdrop on the conversation of any group of role-playing game fans over the age of 30, there are a few key phrases that you’re bound to hear. “RPGs just aren’t what they used to be,” one will undoubtedly lament. “I just replay my favorites over and over,” another will chime in. Eventually talk will turn to the classics of old, where games like Final Fantasy VII and Chrono Trigger are oft mentioned. 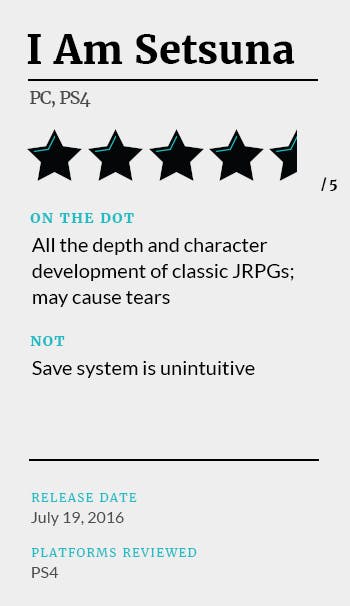 So when a game appears on the scene that not only looks a bit like Chrono Trigger, but even uses its battle system, those same gamers likely feel a flash of hope that this modern game might live up to the legend of the Japanese RPGs they played as teens. Square Enix has continued to pump out games, but some fans complain they don’t go to the same depths as the titles from the Squaresoft days, which delved deep into character development and presented worlds so real that we were saddened to leave them behind.

The storyline of I Am Setsuna clearly takes major cues from the classics. Setsuna, the central character, is a lovely young lady who has been tasked with a very difficult job. The world she lives in is ravaged by monsters, and its inhabitants believe that by sacrificing a woman to these evil forces every 10 years will satiate their bloodlust and end the violence. When monsters start to surge through the land before the 10 years is up, Setsuna is nominated to be the next sacrifice. 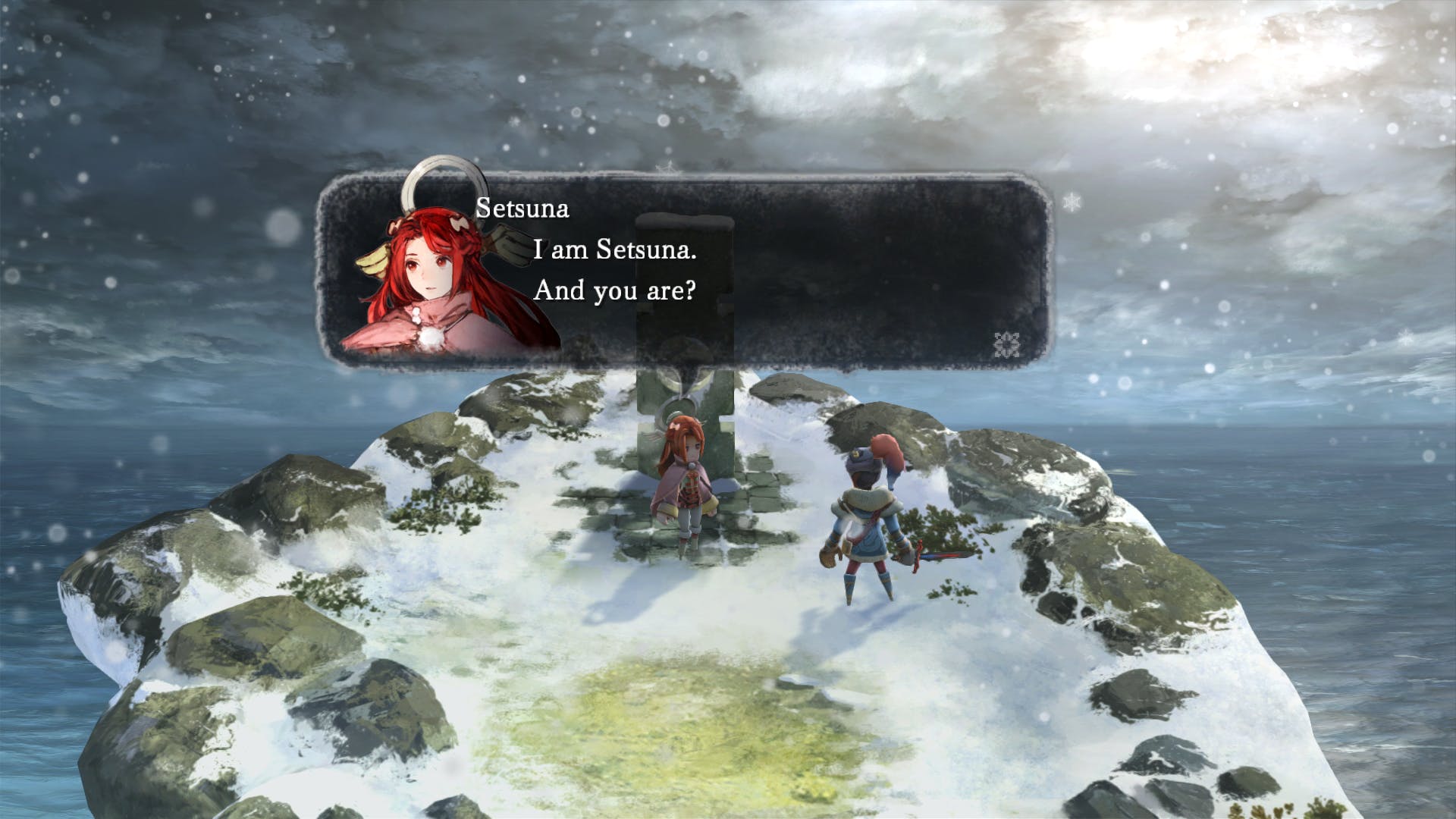 You don’t play as this doomed young lady, but rather as an aloof mercenary named Endir (trope alert!) recruited with a strange mission: Killing Setsuna before she sets out on her journey. It doesn’t quite work out, as you get found out and recruited to accompany her instead, at her request. Since you have a heart of ice and are only there for the money, you should be the ideal candidate to watch an innocent young lady commit suicide for the greater good. Right?

The characters of I Am Setsuna do follow JRPG stereotypes (their battle cries are even in Japanese). If you’ve played Final Fantasy X, Setsuna will remind you a great deal of Yuna. Not only is she on a very similar mission, but her behavior and decisions are also very much like that of the young summoner. The good news is that there are few characters in games with the compassion and kindness that these two display, so it works as a nod rather than a blatant copy. The same goes for Nidr, the time-roughened warrior (Auron? Is that you?). While you will recognize these characters, it feels like coming home to something familiar and wonderful in getting to know them.

I Am Setsuna‘s overworld also has echoes of Chrono Trigger in its top-down presentation. One thing Tokyo RPG Factory took out of the typical overworld formula is random battles. There are none, allowing you to enjoy the music and the gorgeous settings as you go from place to place. While it may seem like a small detail, I cannot applaud it enough. It allows the player to sink deeply into the world. 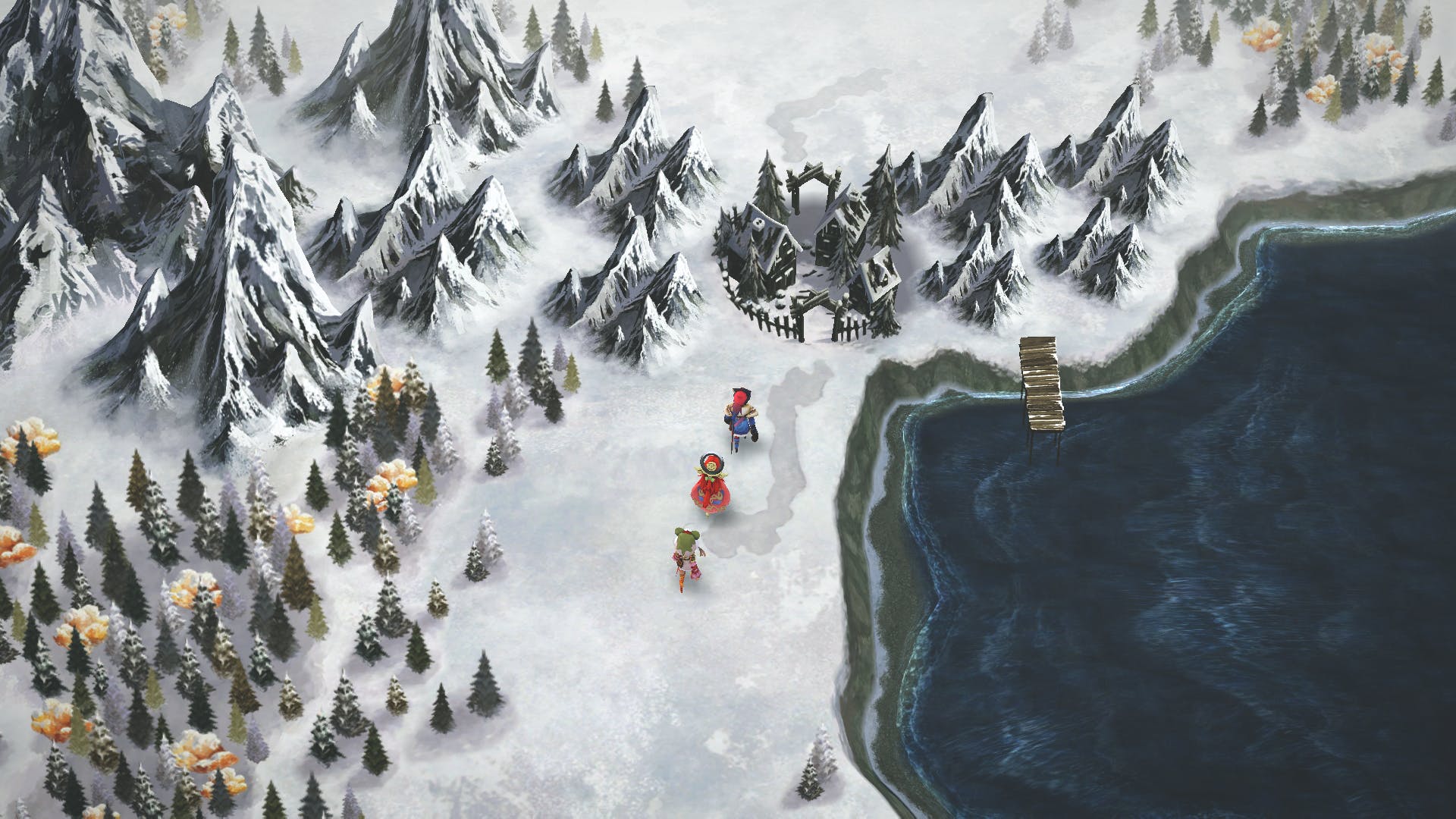 Tomoki Miyoshi’s score is also responsible for a great deal of the game’s atmosphere. All of the compositions are on piano, giving the game a heartfelt feeling from the title screen onward. Miyoshi has only been composing for games since 2012 (he worked on Soulcalibur V Collector’s Edition and Steins;Gate Symphonic Reunion), but this score ought to establish his name solidly as a highly respected composer. It’s contemplative and gentle in a way that invites us into the feelings of the characters and the difficulties of the journey they face.

The battle system in I Am Setsuna pays homage to Chrono Trigger, according to the game’s official website. You might know it as ATB (Active Time Battle). As your characters move through areas populated by monsters, you can choose to engage by approaching them, which will start a battle in the exact spot you’re in rather than switching to a different screen. If you sneak up on the beasties, you get the first strike, which always comes in handy. From there, you’ll wait for the gauge under your name to fill before you’re ready for an attack.

Battle in I Am Setsuna is actually quite fun. In addition to your basic attacks, you have the option to use items, physical attacks, and magic. A lot of these special attacks target more than one creature, so it lends a bit of ease to fighting a group. Enemies can also be pushed back by certain attacks, which comes in majorly handy when certain ones self-detonate just like those mean old bombs from Final Fantasy.

You’ll notice there is no option to defend or run away from fights in your battle menu. You can do the latter with the use of an item you can buy in town. You can also perform combo attacks with other party members when certain pairs both have full ATB gauges, as seen in the X-Strike performed below. 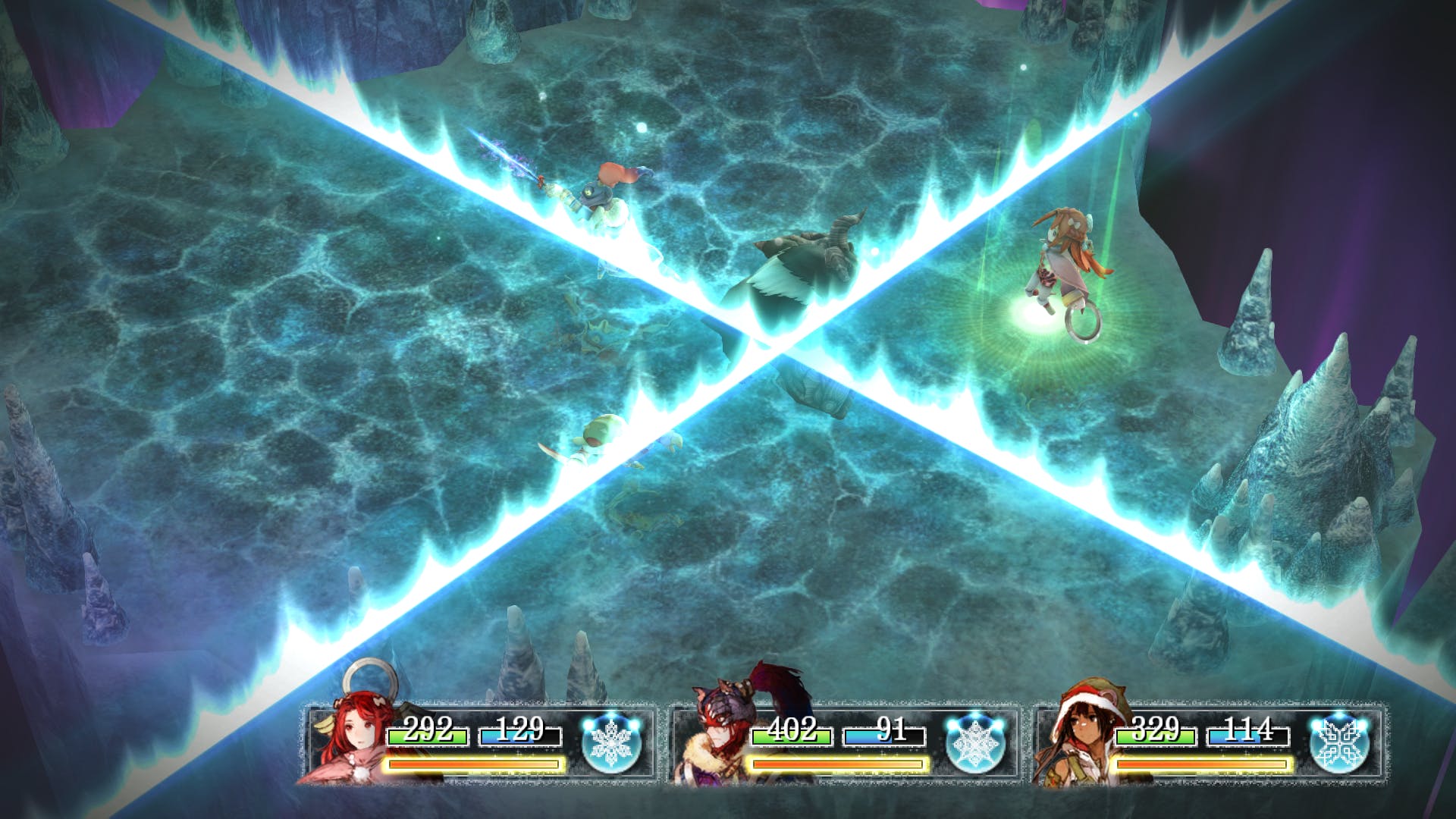 On the right of each character’s information box, there is a blue circle with a snowflake-like symbol within. When it fills, you will have a brief window to click the square button and add some extra oomph to your physical or magical attack. This is just the beginning of the depth that the battle system can offer, and it keeps you engaged in what might otherwise just feel like button mashing your way through battles.

The key to optimizing your characters’ powers in battle is Spritnite, stones with special powers that allow certain users access to combos (or “techs,” as the game calls them). Think of them as I Am Setsuna’s version of Materia. In order to equip them, you’ll need to wear an accessory called a Talisman to house them. These Talisman can have up to three slots as well as bonus effects such as defense power, support boosts, and more. There are tons of Talismans in the game, so you’ll get to choose which ones your party members wear and how you want to customize them. Doing so expertly can lead to devastating results in battle. 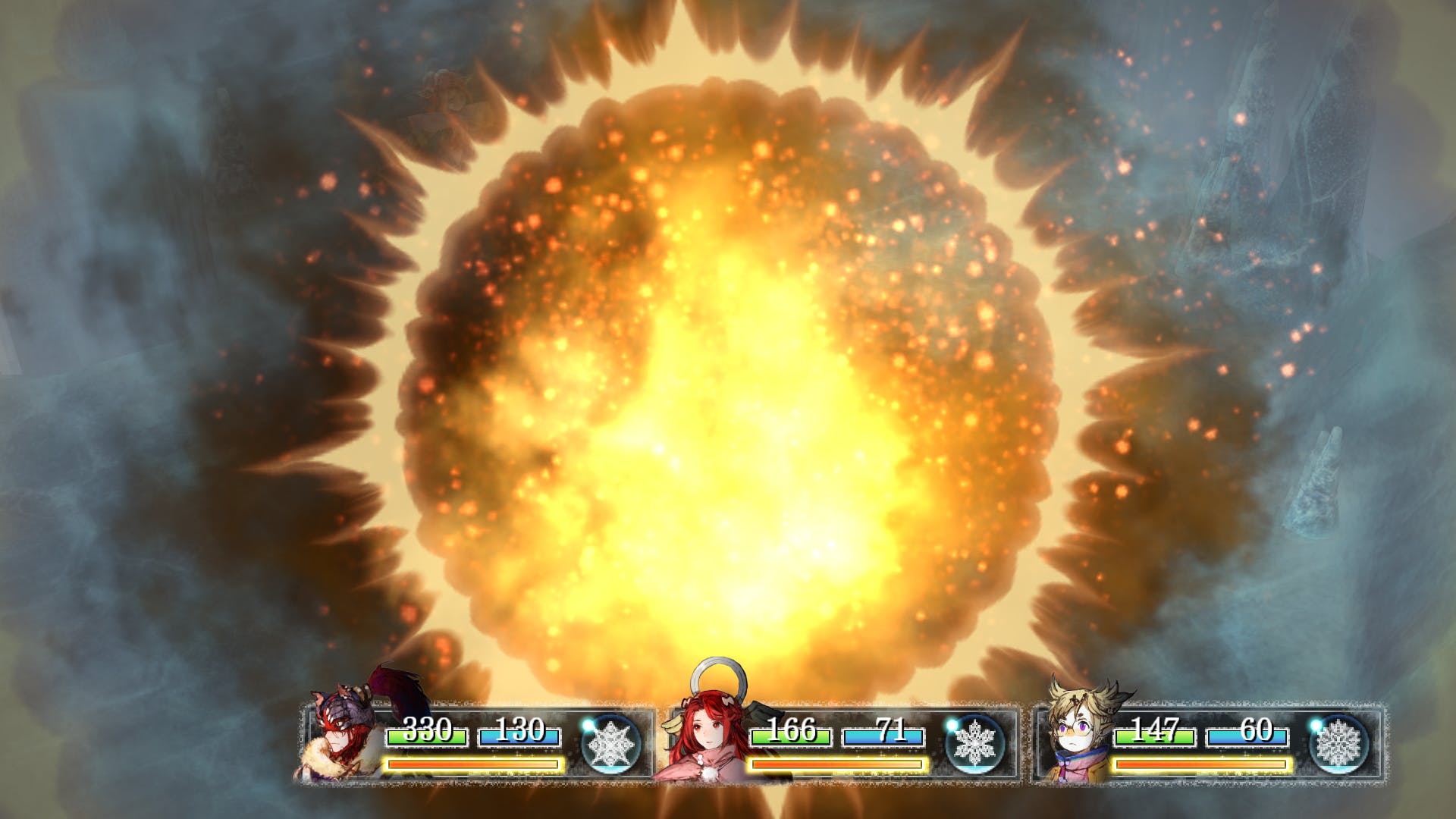 While you characters do gain levels in I Am Setsuna, they feel unimportant compared to leveling in other games. It may be because you don’t gain new skills this way, so the steady progression of your stats is not in the spotlight. I didn’t mind this, as the Spritnite system and Talismans offered enough complexity to keep me occupied. Every town offers a selection of Talisman and Spritnite for sale, so you’ll be upgrading consistently as you try to optimize your characters to their best abilities.

Speaking of going to town, it’s a bit different than the JRPGs you may be used to. At first, it seems exactly the same: houses, a bar, the meddling non-player characters that sound like your in-laws. Then it dawns on you that there is no inn. None. No hotel, no place to heal your wounds or recoup your magic points. To do that, you’ll need to go outside and use a tent, or heal your characters using items. I’m all for dicing up the old formula, but this seemed like an odd thing to snip. You can’t recover at save points either, which leads me to the one thing about the game that I really disliked: the save system. 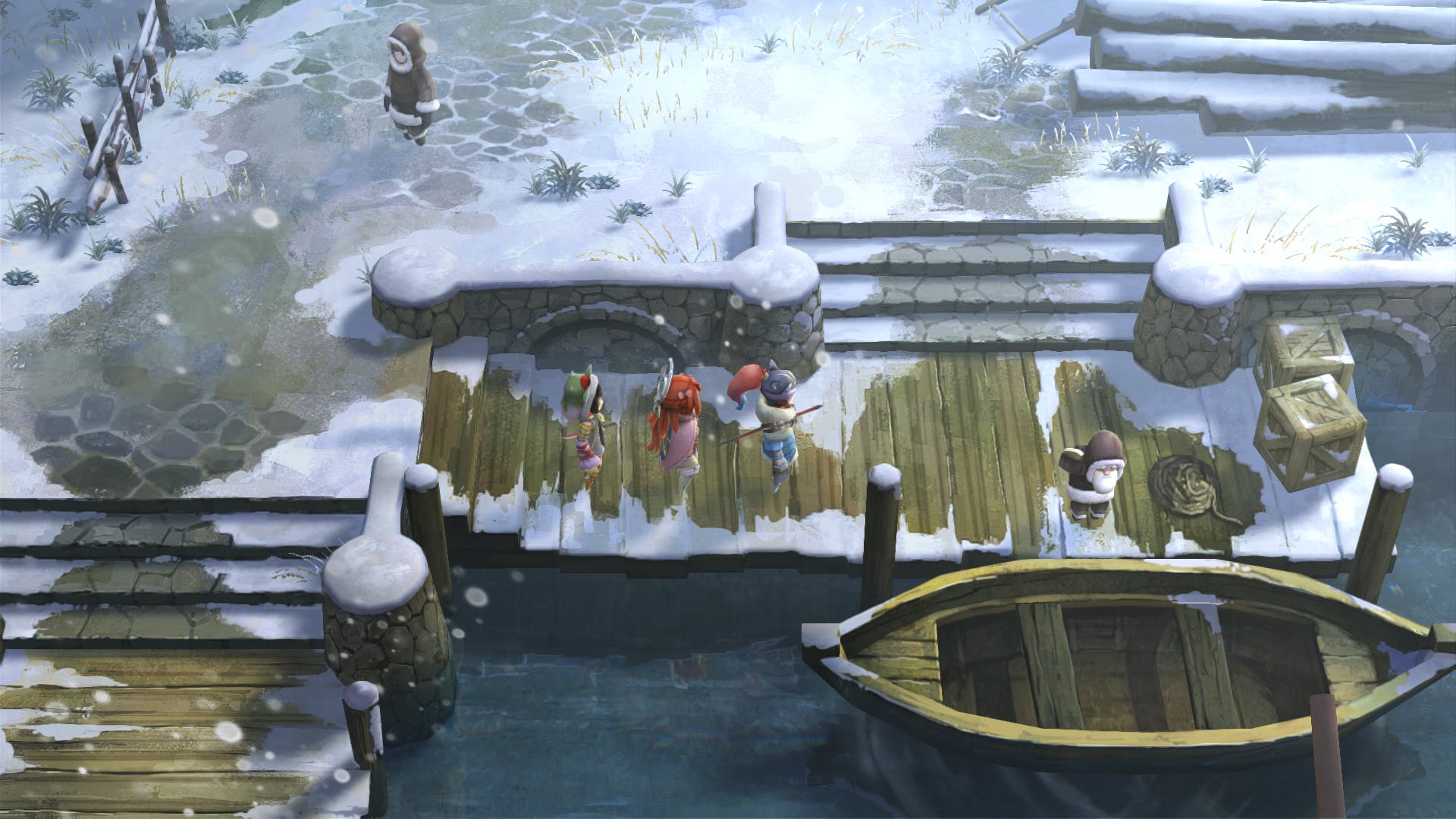 Early on in the game, you’re introduced to a save point. OK, we know how to use these. You can also save at anytime on the world map. But having played games for the past 20 years, I expect to see save points at key parts of the game.

I Am Setsuna‘s save point system is erratic. Around the middle of the game, a series of story events take you in and out of a town several times and throw you into battle. You also fight a big boss that’s very capable of killing your entire party. Despite all this, there is no save point in the town or any place nearby. I forgot to step onto the world map and save there, so I was killed in a battle and lost two hours of progress. Some might say this was my error. I say a save point should have been around, and it was bewildering that there wasn’t one. It’s a good tip to save on the world map before you enter each town so what happened to me does not happen to you.

While annoying, this is I Am Setsuna’s only weak spot. The story is one of the best I have played through in an JRPG in many years. Every character in a game has a background, but all too often developers barely scratch the surface of the people they create. Games like Chrono Trigger do much more to capture a reflection of our own lives by revealing the fears, heartaches, and hopes of their beloved characters. Any successful RPG gazes into the darkness and light of our nature, and I Am Setsuna does so with grace. We come to know our character, Endir, by the way he reacts to the people that join Setsuna’s pilgrimage. And because you often get to choose what he says in certain situations, you may learn a bit about who you are as well. 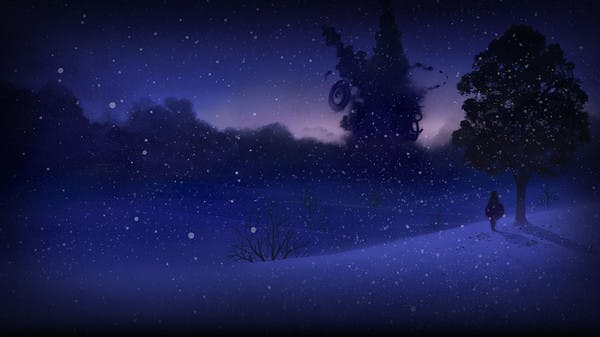 It took me about 35 hours to complete I Am Setsuna, a length I found both pleasing and more fitting to my current busy schedule than an 80-hour opus. This length makes the game feel more modern as well, and it also proves that a powerful story doesn’t need a long time to unfold.

While not as challenging as some of the JRPGs of the past (no Emerald Weapon here, sorry), I Am Setsuna makes it clear that someone is listening to all of those grumbly veteran gamers who miss the adventures that made them fans for life. They long for a story to care about, and that’s what this game provides.