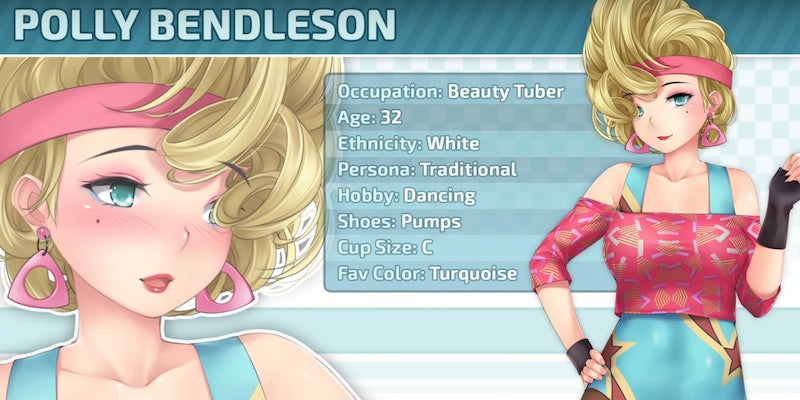 The developer is walking back on the description of the character's gender identity.

Developer HuniePot recently announced that HuniePop 2, due out in 2019, would introduce a transgender character into the mix. The announcement spurred criticism from fans and non-fans alike, and the developer is now walking back on the description of the character’s gender identity.

HuniePot posted an update video Saturday detailing changes to existing characters and new additions to the sequel. The trans character, named Polly Bendleson, is introduced as a “traditional” persona who loves running her own makeup YouTube channel and dreams of being a housewife.

“Also, she has a dick,” the video’s narrator (the recurring lingerie fairy) says. “So you better pack some extra lube in that carry-on. You’re going to need it.”

The term transgender isn’t used to describe player’s identity, and it’s far from a tasteful intro—but HuniePop has certainly never aspired to be respectful of anything, including itself. That said, there aren’t many high-profile dating simulations that allow players to pursue trans characters. The first HuniePop did allow players to choose their gender, but it was a binate male or female choice with no additional context that could include transgender players.

Surprisingly, the Twitter comments attached to the update video are largely positive. At best, some people seem happy to see a trans character included. At worst, they mostly ignore Polly in favor of fanboying over recurring or other new characters.

HuniePot, however, claims that the response it received on Polly is “split more or less right down the middle.” To that end, HuniePot says it posted a poll, with 43 percent of respondents answering that they’d prefer a way to skip Polly while still completing the game.

“This ended up causing a very split reaction that I, honest to god, did not expect,” HuniePot, the alias of Ryan Koons, wrote in a Twitter post. “This is a character we’ve been asked for hundreds of times. I was very much under the impression that ‘girl with dick’ (whatever you want to call it) was a pretty universal interest/preference/fetish among anime/hentai/visual novel fans. I can’t even keep track of how many hentais [anime or manga pornography] I’ve seen where some chick all of a sudden breaks out a huge cock; a fantasy fetish that can be enjoyable onscreen but that doesn’t necessarily translate to real life for everybody.”

HuniePot announced in the same Twitter post that it would begin working on an option for players to outright change the Polly character’s birth-assigned gender to female instead of male.

“If you’re into her as a trans girl, you’ll get the full trans Polly experience,” HuniePot writes. “If not, she’ll be a natural born lady just like the rest of the cast.”

HuniePot wrote that it’s not entirely clear how that option will be presented to players.

Understandably, this has upset many for the potential erasure of the trans community. There’s the issue of whether or not Polly is being properly identified as a transgender individual, given that HuniePot’s only criterion seems to be the fetishistic “she has a dick.” It’s important to note that some trans people who identify as women may have male genitalia and vice versa.

Include her as trans and let people fucking grow up, or don't include her at all.

I had no idea you could actually turn ME off from the game.

Perverts: “My dick knows no bounds!”

Huniepop 2: “You can fuck a trans woman!”

On one hand, if she'a handled with respect & handled just like the cis characters that could be great!

But huniepop is a literal p*rn game and chances are she's gonna be fetishized. That's just a fact.

While responding to users on Twitter, HuniePot added, “If I could do it again, I wouldn’t use the ‘trans’ terminology because it seems like that’s are what people are getting hung up on. In the game, we won’t use any terminology. Not trans, not trap, not futa. It’ll be completely ambiguous. Polly will either have a dick or she won’t.”

In a statement to the Daily Dot, HuniePot reiterated that the choice to allow users to reassign Polly’s gender was a matter of player “comfort.”

“An overwhelming amount of our player base expressed some discomfort with the character, especially considering the primary goal of the game,” HuniePot told the Daily Dot. “So I decided to let each player select the option that best suits their personal taste or comfort level. So, players who prefer that particular character with a big ol’ swingin’ dick will still have that option, in full. So, nothing is being erased. Just more options for different tastes.”

That players can essentially “turn off” Polly’s transgender identity is rightfully regarded as a scary thing, given that harmful practices like conversion therapy aim to strip LGBTQ youth of their identity and replace it with something a conservative culture finds more “tasteful.”

Given that HuniePot regrets even using the word “trans” as an identifier for Polly, it’s perhaps yet another instance of what it means to be transgender being misunderstood by heterosexual communities. But the trans community has long enough dealt with factors that either intentionally or unintentionally erase trans people’s identities—neither of which do any less harm than the other.

It’s unlikely that HuniePop 2 was ever going to be a vital step toward trans representation in video games or otherwise. The franchise will continue to be vulgar, lewd, and hilariously dumb. It’s now side-stepping a chance to expand its fan base in a meaningful way and alienating a subset of its fans in the process.