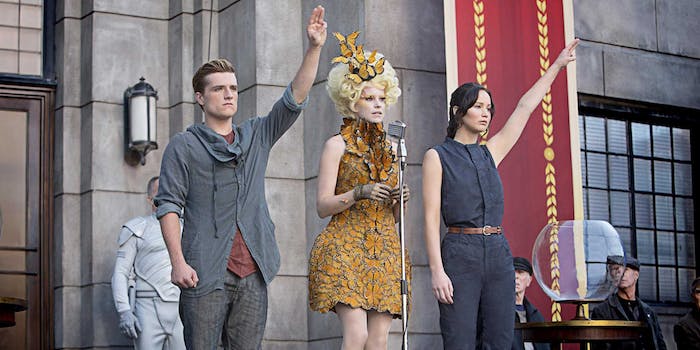 Love ‘The Hunger Games’ movies? Here’s what to watch next

Now that 'The Hunger Games' movies are over, what should you watch next?

The Hunger Games franchise finished its four-film series this year, leaving us bereft of the best young adult movies in years. Sure, there may be some spinoffs in the works, but even Jennifer Lawrence admits that idea sounds kind of garbage.

So with that in mind, what should you watch next? The most obvious recommendations are Battle Royale and the Divergent series, both of which have a lot in common with The Hunger Games. However, there are plenty of overlooked films that will still appeal to fans of Katniss Everdeen and the world of Panem.

To figure out which movies might fill the Hunger Games-shaped hole in your heart, we’ve created a diagram highlighting the three key elements of the franchise: young adult fiction, female-led action, and a dystopian setting. In the dystopian column, the gritty and teen-led Maze Runner and Never Let Me Go are no-brainers for Hunger Games fans. But so too is the 1987 Arnold Schwarzenegger movie The Running Man, a futuristic tale about a reality TV show where convicted criminals flee gladiatorial mercenaries for a chance to win their freedom. Snowpiercer shares a similar political subtext to the culture of Panem, but with a surreal twist: The entire movie takes place on a train, where different social strata are confined to separate carriages, rocketing through a post-apocalyptic landscape.

For female-led action, the pickings are unfortunately a little more slim. You’ve probably already seen Mad Max: Fury Road (and if not, why not?), but the 2011 movie Hanna is a little more obscure. Joe Wright took a break from films like Atonement and Anna Karenina to make this unusual thriller about a teenage girl (Saoirse Ronan) raised in the wilderness by her father, a former spy. Both innocent and tough, she has to travel halfway across the world to reunite with her father, tracked all the way by a ruthless CIA officer played by Cate Blanchett.

As for young adult movies, Harry Potter is often unfairly ignored as a precursor to the Hunger Games—and is kind of set in a dystopia itself. And what better choice of classic teen movie than Heathers, a brutal dark comedy about backstabbing high school students?

Photo via The Hunger Games