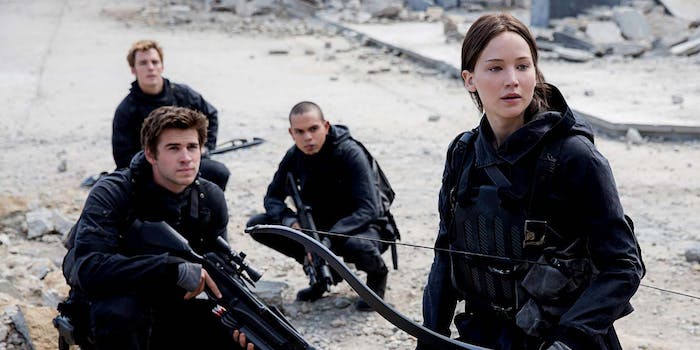 It's the last stand for Panem.

Cultural relevance is one of the greatest strengths of the Hunger Games franchise. The series has already touched on topics of surveillance, celebrity obsession and social inequality, but Mockingjay Part 2 finds itself in the odd position of being relevant and topical to an uncomfortable degree.

After the grim war story of Mockingjay Part 1, this film follows the rebel forces as they invade Panem’s Capitol to overthrow the oppressive regime of President Snow. At least half the runtime is devoted to brutal urban warfare, and given the recent events in Paris, some audiences will certainly find it more upsetting than your average action blockbuster. The overlap is so striking that the film’s premiere was actually scaled back as a sign of respect.

Rather than characterizing the Capitol citizens as faceless villains and the rebels as inspirational heroes, Mockingjay Part 2 offers a more nuanced view. Even Katniss’s closest allies are capable of horrific acts of violence, as proven by Gale’s transformation from hunky best friend to ruthless guerilla fighter. After seeing his home bombed to smithereens, Gale is willing to do whatever it takes to take down the Capitol.

The previous three films spent a long time exploring Panem’s obsession with propaganda and celebrity, with Katniss being molded into a couture-clad Hunger Games champion and later into an icon of the revolution. For the story’s final act, the filmmakers wisely dialed back the focus on the two opposing propaganda machines. Instead we see Katniss struggling with heavier concerns, arguing with Gale over the war’s civilian death toll and desperately trying to control her own destiny under the watchful eye of rebel leader Alma Coin.

Mockingjay Part 1 may have been a war movie, but it allowed for more of a sense of hope. In one spine-tingling scene, District citizens marched on a Capitol stronghold while singing “The Hanging Tree,” a song Katniss accidentally made into an anthem of the rebellion. The resulting attack was a bloodbath, but it was also a powerful moment of emotional unity for the rebel forces.

Part 2 takes place in a more cynical time, after the first flush of zealotry has worn off. Katniss’s own battle narrows to a quest for revenge, knowing that the war will never truly be over until she kills President Snow. This bleakness makes sense for Katniss and Panem, but it removes some of the emotional highs of Part 1. Without the bright spots of Peeta’s friendly optimism or frivolous Capitol stylist Effie Trinket as comic relief, Part 2 often feels devoid of hope.

Four movies in, it’s easy to forget how ambitious the Hunger Games franchise really is. By splitting the third book (perhaps the weakest point of the narrative) into two parts, director Francis Lawrence gave himself breathing room to explore the the emotional intensity of Katniss’s journey, something that would never have worked without a world-class actress like Jennifer Lawrence in the lead role. Compared to other Young Adult adaptations the Hunger Games films are undeniably the most mature and well-acted, digging deep into the emotional and political core of the books. Unfortunately, the final instalment is not the best of the bunch.

For audiences unfamiliar with the books, these last two movies must have been a shock. Part 1 allowed Lawrence to shine with a realistic and upsetting portrayal of PTSD, while Part 2 adds to the trauma with Josh Hutcherson’s depiction of Peeta as a brainwashed prisoner of war, exploding into bouts of murderous rage at his own friends. But this focus on emotional atmosphere has its downside. Splitting Mockingjay in two means there’s precious little plot left for the final part, and some viewers may find it difficult to follow the opening scenes because they continue directly from Part 1. This cements the franchise’s status as a true gift to fans of the books, but makes it less accessible to people who don’t remember specific plot details from previous movies.

Without the benefit of a more Hollywood-friendly plot structure for Part 2, we’re left with something almost unrelentingly grim—another blow to the more casual viewers who don’t already have a personal investment in the story.

Unlike with the final battles of the Harry Potter series, it’s difficult to picture what Panem’s future could possibly look like after the war. Is it even plausible to imagine Katniss having a normal life after all this? Is Panem’s violent history doomed to repeat itself, even under new leadership? Many viewers will already know how this story draws to a close, although as with the books, that ending can’t possibly satisfy everyone.

Photo via The Hunger Games