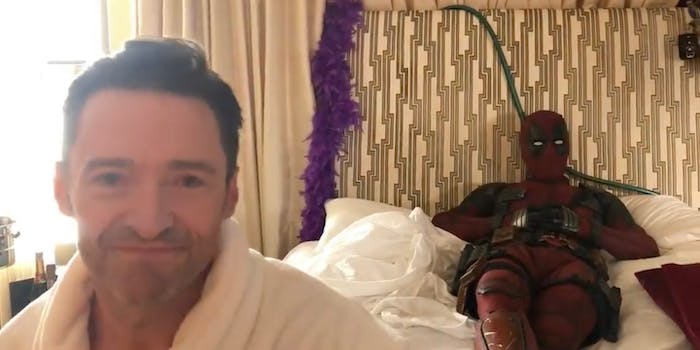 ‘Who let them out? No one knows, no one ever solved that mystery.’

Deadpool 2 star and professional internet troll Ryan Reynolds can’t stop messing with Hugh Jackman—even if it involves well wishes for someone else.

Jackman couldn’t be with a friend for their birthday due to unspecified reasons, so he attempted to record a personal video to mark the occasion. But Reynolds, who has a habit of wearing the Merc with a Mouth’s costume even when he isn’t filming Deadpool movies, was once again in costume and ready to troll Jackman. This time, he’s prepared to belt out a tune. It isn’t long before Jackman joins in, though he warns us not to give Deadpool too much attention.

But Deadpool can really sing! Plus he’s got some insightful existential questions up his sleeve about who, exactly, let the dogs out in the Baha Boys song.

When you’re trying to record a heartfelt birthday message …. but are interrupted by the least greatest showman. Ryan Reynolds

Is it too soon to hope for a Deadpool/Jackman Les Miserables duet?